Under The Influence, 7m 04sec 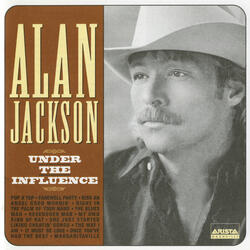 He's just a singer, a natural born guitar ringer
Kind of a clinger to sad old songs
He's not a walk-behinder, he's a new note finder
But his name's a reminder
Of a blues man that's already gone

So he started drinkin', took some things that messed up his thinkin'
He was sure sinkin' when she came along
He was alone in the spot light, not too much left in sight
She changed all that one night
When she sang him this song

Hey baby, I love you, Hey baby, I need you
Hey baby, you ain't got to prove to me
You're some kind of macho man
You've wasted so much of your life
Runnin' through the dark nights
Let me shine a little love light
Down on that blues man

He got so sick from speedin', all the things they said he was needin'
If he was to keep on pleasin' all of his fans
He got cuffed on dirt roads, he got sued over no shows
She came and took all that old load
Down off that blues man, and he sang

Hey baby, I love you too, Hey baby, I need you
Hey baby, I do get tired of this travelin' band
I'm over forty years old now, nights would be cold now
If you hadn't stuck it out
With this blues man

He's over forty years old now, nights would be so cold now
If she hadn't hung around
With that blues man