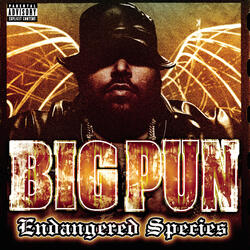 Yo, yo, yo, yo
Yo, yo, yo, yo
Yo, yo
It's hard to explain how my squad can harbor the strain
of being the largest name in rap, since the almighty Kane
Acknowledge the fame, my call was to reign the streets
from Harlem to Queens, back to the Bronx who fathered the dream
Started this thing called rap, where I reign supreme, my team
Regardless of that, I've seen things as far as the crack
that'll make the hardest largest artist heart just collapse
I'm part of all that that's why it's so hard to go back
and start from scratch
I'm locked and I'm trapped, in a giant cage
Tryin to savor these few dyin' days
I have left, to the form of flesh, should I lie in my grave?
I'm tryin to persuade, my motto is try to be brave
and not give death the satisfaction of seein' me dyin' afraid
That why I rise from the grave singin' church songs like
I was Je-sus Christ pa-rum-pum-pum-pum

[Chorus: x2]
Whatcha gon' do when Pun comes?
Knockin' at ya front door
And he wants war, holy shit!
He ain't a rapper he'll kill you

'Til my last breath I'll have death before dishonor (c'mon)
And welcome drama (yeah) with open arms and a code of honor
My whole persona equals that of Gods
Definin' matters hard all before you even had a job
I'll stab and rob if I have to, fuck it I'll blast you
Tell the devil it was Pun, if he ask you
And let him know how we be deadin' 'em, show him my emblem
The tombstone, the throne, every millennium
A child is born that can preform at a level beyond
the expected four minute thirty second song
We reign supreme, my team be all up in your dream
with the "kill anything" grill, chillin' beside the guillotine
Executioner style, black suit and a smile
Who's next to get their neck hacked loose in the crowd
Move from the aisle, don't make me have to prove that I'm wild
Word to Cuban, my crew killers, y'all niggas shoot in the clouds
(Who's in the house?) Punisher straight from hell
Who's in the house (Terror Squad motherfucker we the real)
What the deal, now you know that's how we roll
Hard core like B.O., bring in the corns baby bro

Chat About Whatcha Gon Do by Big Pun