Biz Is Goin' Off 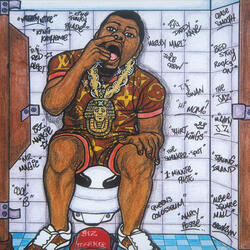 Hey to everybody and, people that say partyin'
It's time to hear a funky rhyme from me the Biz Markie again
As I just display 'em, the way I like say 'em
The stutter steppin' style that I use to amuse and hey
I'm the original, hellified king-ing
For freaky sound, for throwin' down, and you know that I'm bringing
The crowd to enjoyment, by what I do

I keep the people cheerin', because of what they hearin'
Movin' and groovin', to a devastatin' sound that's glarin'
Because they're in the mood for me
The B-I-Z the Emmezah-Emmezah-A-R-K-I-E
The party rippin', never trippin', king of crowd pleasin'
I can turn it out without a doubt in any season
I entertain crowds, a million and thous'

Homeboys makin' noise, as I do browse through a girl's blouse
Say the funky rhyme to make the girls get naked
I can turn it out, with different sounds on my record
That I say give 'em, as y'all exault the rhythm
The magnificent record maker of Prism

Ha ha ha ha ha! Check out this bizarre
Rappin' style used by me, the B-I-Z
Emm-A-R-K-I with the E and, you will be agreein'
A brother ain't a brother unless he is say like G'n
Up with his technique and, keep the people freakin'
Like me the Biz Markie because my style is so unique and
Guaranteed to rock the mic with rhymes that I say
I'm just as good as Clint Eastwood, so won't you make my day

Markie the original, yes I am the boss
And I can rock the microphone for you and yours
Go {*boom, ah one two*} 'til my voice is hoarse
Then take a pause, and you know, of course
I can rock a party, with so much force
I'm the greatest entertainer Marley came across
Puttin' pictures in photomat to give 'em a gloss
And I don't eat spaghetti without the meat sauce
Whether Ragu, Prego, Hunt's or Aunt Millie
You wanna get dissed? Then try to get illy
with me the inhuman, because I'm like boomin'
Reagan is the Pres, but so was Harry Truman

Now! I make rhymes, each and every day
And always seem to come up with somethin' fresh to say
In January, February, March April May
And the other seven months of the year, but anyway
Hey, feel the lay okay, here's a rhyme I must display
When I'm finished you be in it sayin' HIP HIP HOORAY!

I will be an emcee, 'til I'm old and grey
And I can even rock the mic with tooth decay, decay
Yo - ladies of the 80's know that I'm the
Original B-I-Z-M-A-R-K-I say with an E
You know me, and my man Big Daddy

I can't forget, Cutmaster Cool V
And my partner, my best friend TJ Swannie
Rockin' the mic would say most definitely
So listen don't be missin', I will never be dissin'
I just rock the mic, and always have discipline
Listen to the brother ain't no other you discover
I rock up the mic just like if I'm, your, mother!