Stoned Is the Way of the Walk 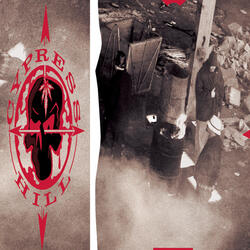 Well, it's the Alley Cat puffin' on a hootie rat,
Some think I'm a criminal,
But, yo I ain't all of that,
Hit ya with the baseball bat,
An' ya want to ill though,
Want to mess around ,
You get fucked on the hill bro,
Kick it like a steel toe, real slow,
Hits from the bong ,
Make me feel like Cheech,
And I'm kickin' it wit' Chong,
Just like Cheech and Chong frontin' with "Ice Cream",
Cypress Hill is here to give you a nice dream,
Speak it like a rolla', and you know it's rolled tightly,
I'm like the funky beat, so, why ya tryin' ta fight me,
Pigs often site me, that's not polite G,
And any hour of the day ya know I might be,
Harassed by a pig real fast,
They want to Rodney King me,
Always tryin'a crown my ass,
Ain't got no class(Sen Dog: No Class)
I hit they' ass like the buddah that's stinkey,
They want to' scruff but, they' just so rinky-dinky,
I'm the freaka, the one who freaks the funk,
Sen gotts the Philly, an' he's gonna light the blunt,
Sippin' curfew makes me go koo-koo,
Somthin' like loco then turn in to this loocoo,
Binggin the beta,yea, now the funk is risen,
Got the beta bass and the nasal highzen,
As I kick atrip, it comin' straight from my siness,
Crazy nasal vocals, cannot make the hotties loco,
I rimemba sista Maggie, breast were kinda saggy,
Used to sell me buddah outta fucked up little,
Honeyd up a twenty even when I had no money,
She said "Pay me back with some latin dick Sonnie"
Well I neva' went out, and I don' thnk I'm gonna,
Just for some buddah, she wanted me ta bone her,
Deminin', Ya think ya meanin',
I got somethin' for the hoes ta be skeamin' on,
I'm the Buddah-Real take a trip ta hoota'ville,
I'll throw ya out the door, of my big blue Siville,
Then light another joint,
This ain't no exploition (poin't),
Cause we are the ones stonein' in the ways of the mastas,
Stoned is the walk,
Stoned is the walk,
Stoned is the walk,
Stoned is the walk,
(Sen- Dog)
Hit they, hit they ass,
(B-Real)
Make the Buddha get stinkey
(Alas, Cap'in there's a ship in sight,
Huhu, Blast 'em!)
Stonend is the walk