Letter To The Future 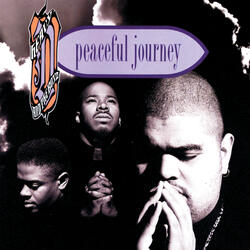 People,
The world today is in a very difficult situation,
And we all know it,
Because we're the ones who created it.

What's wrong with our future? (4x)

How long will this last?
A friend to the end, a memory in the past
You think you're big, cause you walk with a shotgun
I got new for you, your days are numbered, son
Why don't you get yourself a job?
When your kid grows up, do you want him to rob?
Look at your mother, teardrops
She just received a phone-call from the cops
"Your son will do life, 'cause he wigged a man's wife
Shot her with a gun and stabbed her with a knife.", or
Take a look at your mother's heart torn
She just received a phone-call from the morgue
"Your son is dead from three shots to the head.
The killer left a note and this is what the note said:
"Never be bigger than you are.
Never try to pose like you're a superstar
Next time you rob somebody, and you give him the death-wish.
When you pull the trigger, nigga, don't miss."
Is this how you want to be
Dead on the street or locked in a penetentiary?
It's cool to be free
And it's alright for you to be you and for me to be me
Look at you, 15 years old
Coolin on the corner with a can of Old Gold
Whatever happened to school?
Yeah, sure you go to school, but you go to be cool
To sport sneakers that you took from somebody
To talk about the kid that you bucked at some party
Life is a gamble, and you're losin
Before it's too late, brother, you better start choosin
Left from right, right from wrong
Or you'll be singin that old blues song
(Yo, you gotta buck em, or else you're soft)
Some I knew thought the same, now they're way up North
You ain't soft, cause you didn't buck a shot
Put the pistol down, throw up your hands, see what ya got
Old Johnny Walker from around the block
Was livin' rather large 'till he got knocked
He had "Livin' Large" on his Jeep plates
"Livin' Large" on his real estate
He even bought a diamond "Livin' Large" name plate
He used to look at cops and smile in their face
Drive a BMW and pump the bass
One day, he made a move for a friend
The f-are-iend, the voice said, "Yo, I need ten.", Johnny said, "When?"
Later on that day, Johnny went to play the game he normally plays
To do a favour for a chum
You see, a friend is a friend, but then, some are none
Cause when he got to the spot they were supposed to meet
All he found was a police-infested street
I guess havin a friend is rough
Cause now Johnny's up north, doin push-ups, gettin buffed
You see this chain I've got, I've got it, honestly
You see the clothes I wear, I've got it, honestly
You see the Jeep I drive, I've got it, honestly
I work hard, it ain't easy being me
Never had an excuse for life
Just did what I did, now what I do, I do it right
"Jumbo, Jumbo", they cry on the block.
5.0, 5.0, lay low, here comes the cops
Man, your lifestyle is petro
On your knees again, because Jumbo said so
"Free Mandela", you cried
But you still sell dope to brothers and sisters outside
Martin Luther King had a dream (ooh yeah)
That's exactly what turned his dream into a nightmare
Malcolm X said, "By any means necessary."
He didn't mean just for you, brother, he meant for everybody
Maybe if we were still slaves, we'll be closer; however
Pickin cotton was bad, but we picked it together
I pray for you, and you pray for me
Sincerely yours, the overweight lover, Heavy D