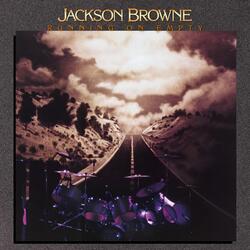 Rolling down two ninety five out of Portland, Maine
Still high from the people up there and feeling no pain
Gonna make it to New Jersey, gonna set it up and do it again

Well it's a rock and roll band or a movie you can take your pick
And it ain't bad work if you can get it
But you gotta make it stick
But getting any kind of sleep on this rolling motel, that's the trick