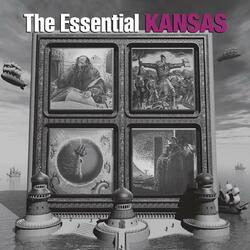 On a winter's night, stars are cold and bright in the sky,
The slumber of the earth is pure and deep
From a distant wood, drifts the echo of a beast
The old man stirs and wakens in the night
He stands before his window gazing at the grave
Forgotten dreams are flashing through his weary mind
And though his life is empty, he pretends that she's still there

With hunger in his soul, he yearns for life and love gone by,
With memories his one and only joy
All he has to give, he would give to bring back the life,
And raise the one who lies beneath the snow
He lights a lamp and looks at pictures of the past
The faces of their youth still glow with new-found love,
But the picture's faded, and time has stolen youth away

With a spoken word that he thought he heard from her lips,
He felt another presence in the room,
He was filled with fear but filled with joy he arose
And turned to face the image that he knew
She stood before him and her hand reached out for his
A peaceful light shone in her eyes
She said she'd come to soothe him, and someday they'd be as one

She began to fade and her image disappeared,
So he was left alone to face the night,
Never in his life, had he been so held in awe,
As he faced the apparition of his wife
He stood before the window gazing at the grave,
And with a lightened heart he saw the first of dawn,
He knew that she was waiting, that someday they'd be as one

Chat About Lonely Street by Kansas