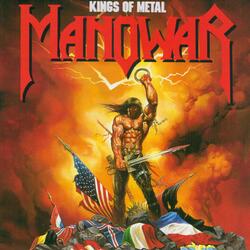 Grand father, tell me a story!
All right, go and get your storybook
No, no, not one of those, a real story
A real story?
Yes! Tell me about when you were a boy
Well, then, I shall have to take you back with me
A long way in time

It was my thirteenth year on a cold winter's day
As I walked through the enchanted forest
I heard the sounds of horses and men at arms
I felt compelled to walk on and find the place of these sounds
And when the forest did clear I was standing on a hill
Before me there was a great plane
Atoned the armies of the world,standing, waiting
I thought to myself, for whom or for what are they waiting?

Suddenly a gust of wind come up from the north
There appeared a lone rider, holding a sword of steel
Then from the south came another, bearing a battle axe
From the east came a third, holding a spiked club
And finally, from the west a rider
Who wielded a great hammer of war, with them came their
Soldiers of death, followed by an army of immortals
They were few in number

But the look in their eyes told all who beheld them
That they would leave this day only in victory or death
And there was a great silence
My heart began to pound, storm clouds filled the sky with darkness
Rain came and four winds blew with such anger
That I held fast to a tree
I watched the four riders raise their weapons into the air
Without warning, screaming their war cry they led the attack

Down to the battle they rode
They met the armies of the world with a mighty clash
I could feel the groundshake, the earth drank much blood that day
Each of the four, was into himself a whirlwind of doom
When the smoke did clear, many thousands were dead
There was much blood and gore
Their bodies lay broken and scattered across the battle field
Like brown leaves blown by the wind

And I saw the four ride together to the top of the hill
While below them the soldiers of death assembled
All those who would now swear allegiance to them
And the four spoke the words of the warriors prayer
Gods of war I call you, my sword is by my side
I seek a life of honor free from all false pride
I will crack the whip with a bold mighty hail
Cover me with death if I should ever fail
Glory, majesty, unity, hail, hail,hail

And as I stood and looked on, I heard the armies of the world
Hail them without end, and their voices of victory
Carried long and far throughout the land

Well, That's it, did you like the story?
Yeah, it was great!
Oh, good, I'm glad, now off to bed with you
Grandfather?
Yes?
Who were those four men?
Who were they? They were the Metal Kings