No More To Say 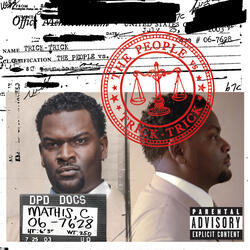 You know the days of talking is over
And there ain't too much more we can say
To try to get these different individuals,
or muthaf***as as I like to call 'em
To just, shut the f*** up
Let's go

You witnessed the a** whooping, bones got broke
When the fifty calib blast, wouldn't last
Through the smoke as you choke
Pay attention bear witness to this muthaf***in' twitch that you excite
Cause none of the bullets hit you they missed you,
But we ain't trippin' wasn't after you,
Don't you piss, it's like a b**** them ni66az laughed at you
Now you agitated a little bit, acting just like a little b****
I figured that you would surface I knew you happen to managed to pop s***
Saying Trick that, Trick this
When the balls that you have and if when I pop them
Should of died wit 'em, body and soul coulda burn
I'm a keep killing these b****es until everybody learn
F*** time and it's time that these f***ers to start dyin'
I ain't sayin this to say in this rhyme and I ain't lyin
Man enough to say it and mean it, ni66az can be gone
I'm a do another verse but there ain't much more I can speak on

There's nothing more these words can say
This hard headed muthaf***a just won't let it lay
So say a prayer for this playa' cause he's going to his grave
So stand clear b****es betta' get the f*** out my way.

Let me show you how I started as a starvin' artist
This is Proof wit the truth regardless of all this
As my C-E-O and best friend of the essence
I won' why nobody in Detroit won't test him
Lesson learned, flesh get burned
Tex in turn, a scar hotter than the press and burn
Everlast the beef is over, you can sleep this over
Clique Benz took the streets wit soldiers
Including me I move and creep wit Uzi fleas that choose to lead
I'll put your dudes to sleep
Who is he (Trick) Trick no treat
That street life A-K that still'll lift your feet
The rest of these n****s is comical
I'm a go abdominal, split like a domino
Rhyming pro, sharp without a diamond, Go
Geronimo to any man wit pause
Murder you b****es, still screaming f*** the law!

There's nothing more these words can say
This hard headed muthaf***a just won't let it lay
So say a prayer for this playa' cause he's going to his grave
So stand clear b****es betta' get the f*** out my way.

Chat About No More To Say by Trick Trick