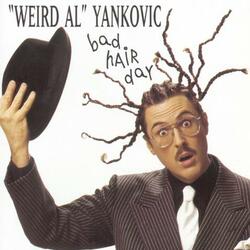 A local boy kicked me in the butt last week
I just smiled at him and I turned the other cheek
I really don't care, in fact I wish him well
'Cause I'll be laughing my head off when he's burning in Hell
But I ain't never punched a tourist even if he deserved it
An Amish with a 'tude?
You know that's unheard of
I never wear buttons but I got a cool hat
And my homies agree
I really look good in black fool
If you come to visit, you'll be bored to tears
We haven't even paid the phone bill in 300 years
But we ain't really quaint, so please don't point and stare
We're just technologically impaired

There's no phone, no lights, no motorcar
Not a single luxury
Like Robinson Caruso
It's as primitive as can be

Hitchin' up the buggy, churnin' lots of butter
Raised a barn on Monday, soon I'll raise anutter
Think you're really righteous?
Think you're pure in heart?
Well, I know I'm a million time as humble as thou art
I'm the pious guy the little Amlettes want to be like
On my knees day and night scorin' points for the afterlife
So don't be vain and don't be whiny
Or else, my brother, I might have to get medieval on your heinie