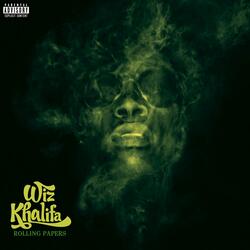 See I've been going on and on forever
Them haters probably wonder when I'm gone stop, never
Most of it's been good but I've seen some bad weather
And niggas watching now, wouldn't even give me an umbrella
But I ain't tripping, I made a million on my own
May come to your surprise but I pictured it all along
When I was sixteen, finna get put out my home
Now the man make the money, my nigga, my money grown
And I can do what I what, went form being hated on
To niggas try to go down the same road I made it on
Ain't no love lost but ain't no love shown
So now when niggas call I just don't pick up the phone
I'm breaking down the weed, put it in the bong
Blow a hundred racks, put it in the song
Party every weekend, hardly ever home
Don't get a chance to see me face to face
So you have to talk about me when I gone

The drinks poured up, weed's rolled up
And all my jewelery ice age the piece froze up
I only like to see the hoes who keep their nose up
Have any nigga in the world but she chose us
I remember them same hoes ain't even notice us
Get you to buy a drink than its over cous'
We back around the time that she sober'd up
But shit ain't been the same since the limousine showed up
The best moments of my life
Never filled this much plastic off of Polo in my life
Rarely gon' to see, smoking with ya wife
Plus anything you want I can afford to buy it twice
It's the way we know, wake up in the morn'
Like "where did all my paper go"
Roll some more weed and get medicated
Everyday is a holiday so we celebrate it

I guess the difference is we ain't thinking the same
So if I'm guilty of change, I guess I'm the one to blame
I see the bigger picture on the wall in the frame
Spent a couple of days on team making it rain
I was cool but, I was thinking ocean views
Polo trunk shades on and boat shoes
Cantox lick oil, my nigga I ain't slippin'
You won't star me out, ugh bad transmission
So if for the better, yeah a nigga different
That west coast weed, my homie Wiz twistin'
Mattress money put up 'cause now my money different
You got a lot to say, but they ain't never tried to listen
Record all night in the studio in the morn
Playin' back when we did, now tell me is that wrong
Crack the Rose, pop a top or two
And toast to what this hard work got us to

Chat About Star of the Show (feat. Chevy Woods) by Wiz Khalifa