Backstaged: The Devil in Metal •
iHeart

The Satanic Verses Vol. 2 - Backstaged: The Devil in Metal

Backstaged: The Devil in Metal

As metal music continued to grow in popularity, thrash bands turned up the inclusion of Satanic lyrics and sound in their music. Venom and King Diamond were among those to lead the way. Many metal bands became more extreme, musically and lyrically. Host Jon Wiederhorn speaks with Venom vocalist and bassist Cronos, Gary Holt of Exodus and Slayer and King Diamond of Mercyful Fate and many others, as he explores “The Devil in Metal.” This is Episode 2 of a 2-Episode arc.

Venom vocalist and bassist Cronos shares what led him and the band to their style of metal.

Gary Holt of Exodus and Slayer talks about his early days on the road.

Mercyful Fate’s King Diamond reveals what was behind some of the band’s pro-Satanic music.

Atheist frontman Kelly Schaefer goes over some of the crazy “stuff” he saw backstage.

Vincent Crowley, former Acheron frontman, talks about being a member of the Church of Satan.

Backstaged: The Devil in Metal is a production of Diversion Podcasts in association with iHeartRadio.

This season is written and hosted by Jon Wiederhorn.

Produced and directed by Mark Francis and Scott Waxman.

Our Consulting Producer is Andrew Kalb.

Production assistance from Anita Okoye and our Social Media consultant is Stephen Tompkins.

The Instrumental guitar music is by Scott Waxman and editing by Chris Schreiner.

Special thanks to Oren Rosenbaum at UTA.

Learn more about the podcast at DiversionPodcasts.com. 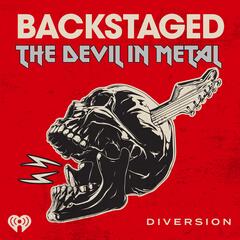