Rush Limbaugh: The Man Behind the Golden EIB Microphone •
iHeartRadio

Most Difficult Day - Rush Limbaugh: The Man Behind the Golden EIB Microphone

Rush Limbaugh: The Man Behind the Golden EIB Microphone

Host James Golden had a front row seat to the Rush Limbaugh Show for nearly all its 33 years. He acted as the Show Observer and was the program’s call screener. You might know him better as “Bo Snerdley,” as Rush would lovingly refer to him on the air. In this podcast, you'll hear from "Snerdley” himself, as he shares his own unique perspective of the man who changed the conversation in America forever. It’s a heartwarming, emotional and revealing testimony, particularly as James takes us through Rush’s final year on the radio. Even in the midst of a Presidential election and a pandemic, throughout Rush’s battle with an advanced lung cancer diagnosis, the only item on his bucket list was to spend time doing what he loved most: being with you on the radio. This episode also contains an appearance by Mayor Rudy Giuliani, who narrates a special feature dedicated to Rush’s childhood dream of being in radio. 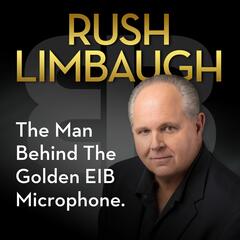