Mark Steyn hosts a tribute to Rush. Margaret Thatcher's words from Reagan's eulogy. You can send condolences to the Limbaugh family via the condolences tab at RushLimbaugh.com. Rush explains how he got his theme song, My City Was Gone by Chrissie Hynde. Montage: Everybody remembers the first time they heard Rush. Kathryn will join us on Monday to take calls from you. Clip from Rush on an early leased access cable show from the ‘80s. Caller on what Rush meant to him. Conservatives live in a left-wing world. Liberals are never exposed to conservatives, but Rush could convert them.

Rush discusses his induction into the Missouri Hall of Fame and how he took a different path from his family full of lawyers and judges. Rush interviews Justice Clarence Thomas. Rush's classic fard-ing joke. Rush God Rest Ye Merry, Gentleman gag from his TV show. Caller on how Rush made his father laugh. The first time you heard Rush. Ron DeSantis to fly Florida flags at half staff in honor of Rush.

Rush discusses his legendary parodies. Rush's Born Free Andy Williams Animal Rights Update. Mark tells story of his first email from Rush about a Bobby Darin record. Rush debates a caller: Do you become a jerk if all you eat is organic food? Truck driver remembers finding Rush at 16 years old in a car with only AM radio. Rush's grandfather lived past 100. We all expected Rush to be around for many more years, but it wasn't meant to be. 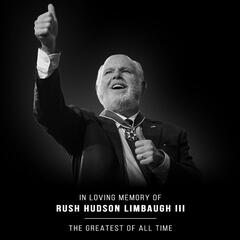