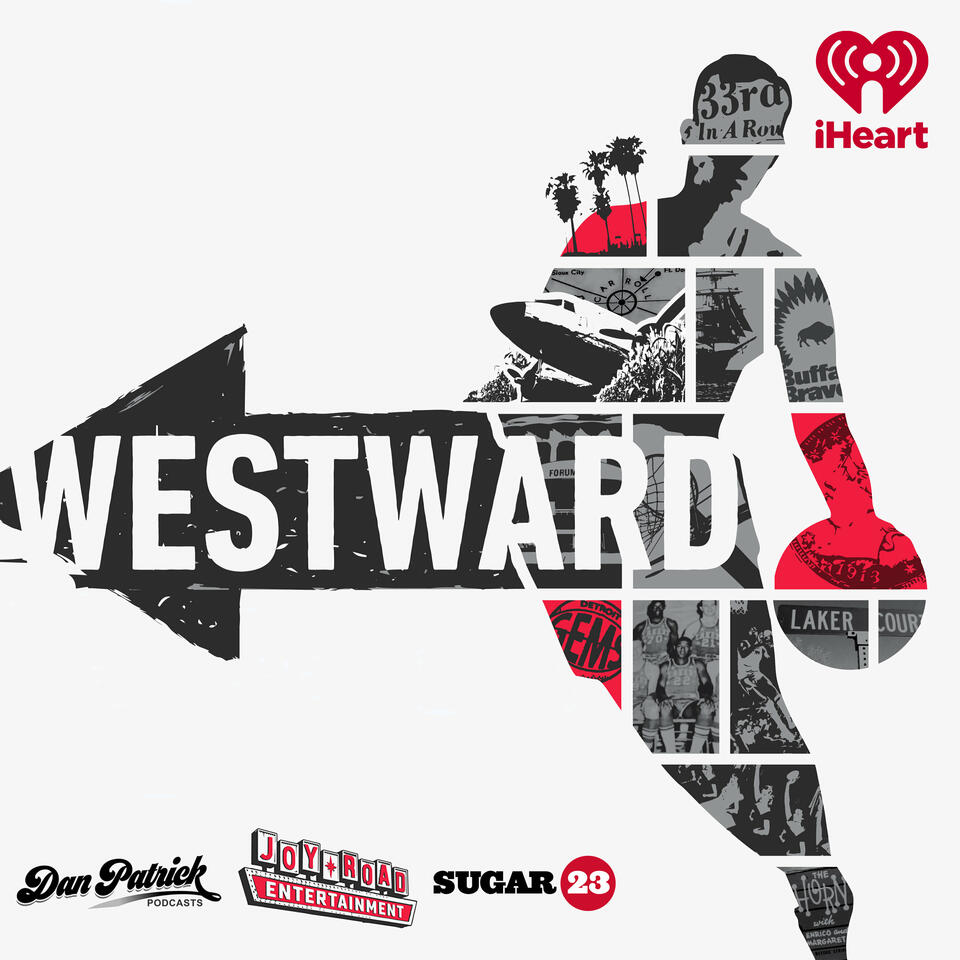 Westward chronicles the history of basketball in the NBA and how the city of Los Angeles not only saved the fledgling league by bringing the Lakers from Minneapolis, but gave birth to the modern NBA with “Showtime.” Told through the lens of Jerry West, who helped build the dynasty of the Lakers, “Westward” now follows the former Hall Of Famer as he attempts to build a dynasty with L.A.’s other NBA franchise, the Clippers. Narrator – Keith David, Tim Livingston, Bobby Glanton-SmithFrom the Dan Patrick Podcast Network, Westward is a production of iHeartRadio, Dan Patrick’s Productions, and Joy Road Entertainment, in association with Sugar23 and Workhouse Media.

At the center of the podcast series "Westward" has always been Jerry West. This bonus episode features raw audio of original interviews with the basketball legend as he talks about a variety of subjects, from his days with the Lakers and stories about some of his fondest moments with icons like Richard Pryor, to what he looks for in scouting players. This is Jerry West at his most accessible, candid, and thoughtful.

As the Clippers and Lakers head towards the 2019-20 playoffs, the unprecedented happens when the NBA suspends all games due to the Coronavirus. During the lockdown, players across the league join a crusade for social justice in the Black Lives Matter movement after a number of tragedies involving police shootings. In attempt to salvage the season, the league resumes play at a $200 million quarantined "bubble" located in Orl...

Episode Nine: The Mamba and the Mongoose

The city of Los Angeles and the world, is left in shock after the sudden death of Kobe Bryant. Friends of former superstar, George Lopez and Byron Scott, share some of their stories and Jerry West reflects on what Kobe meant to him. Episode chronicles Kobe Bryant's unlikely landing to L.A. and how his play captured the fan base in Los Angeles just like a young Jerry West did thirty-five years earlier.

Learn more about your ad...
Share
Mark as Played

Episode Eight: The Guy is Kind of Weird

In 1981, while the “Showtime” era was in the early stages of launching the entire league into the stratosphere of cultural and commercial relevance the San Diego Clippers under Irv Levin, make a final play for NBA dominance when they make the ill-fated trade for center Bill Walton, a San Diego-native. In the wake of that mistake, Levin sells the team to a friend of Jerry Buss’ and the Donald Sterling era begins. Former San Diego Cl...

Long before Jerry Buss came up with the idea of “Showtime,” there was a coin toss that gave the Lakers the Number One pick in the 1979 Draft. Misfortune then strikes the new Jerry Buss-owned Lakers twice, but with interim coach Paul Westhead, the team goes on to make history on and off the court.

Episode Six: Fine by Me

The roots of the troubled Los Angeles Clipper franchise are traced back to Buffalo, where, as the Braves, the team is sold and then swapped for another franchise. The new team relocates to San Diego and rebrands itself as the Clippers. But the team continues to struggle as the NBA as a whole goes through a dark period. Despite the league’s problems, two hours north in Los Angeles, a successful real estate mogul and chemist named Je...

Episode Five: This Will Be a War

After losing Elgin Baylor to retirement just weeks into the ‘71-‘72 season, the Lakers go on an historic winning streak, culminated by their first championship in L.A. Jerry West bonds with Wilt Chamberlain. But while West and the Lakers were making history, the team that would become the Los Angeles Clippers, the Buffalo Braves, were on the brink of being history as the NBA as a whole enters a troublesome period.

Episode Four: In the Middle of Crenshaw and Watts

While the Laker franchise tries to heal after their sixth loss to the Celtics in the Finals, the city of Los Angeles tries to heal in the wake of the Watts Rebellion. Amidst the racial strife, the league suffers with both sponsors and national relevance. Owner Jack Kent Cooke then makes the trade that changes the landscape of the NBA when his Lakers acquire Wilt Chamberlain. But the team’s championship plans are thwarted once again...

Built on a Fault Line

The Lakers take a massive step forward in building a championship team when drafting Jerry West in 1960. Together with Elgin Baylor, the pair begin a furious decade-long struggle to wrest basketball supremacy from the East coast stranglehold of the Boston Celtics. In the middle of this struggle, the seeds of "Showtime" are established and Bob Short sells the team to Jack Kent Cooke.

Learn more about your ad-choices at htt...
Share
Mark as Played

They Call Him the Rabbit

After narrowly averting catastrophe in Carroll, Iowa in January of 1960, Bob Short and his Minneapolis Lakers relocate to Los Angeles. Though they would struggle with the extended travel and limited exposure of being out West, the franchise flourished on the back of the late, great Elgin Baylor. This episode chronicles Mr. Baylor's journey from small-time college basketball phenom to the league's first African-American supe...

In Los Angeles, at the center of one of the most compelling and complicated rivalries in basketball, is Jerry West. Having spent the first forty years of his career with the Lakers, and his last three with the Clippers, West has become an icon for fans of both and a personification of the phantom thread that runs through the city and the sport it loves. Episode One chronicles the birth of basketball in Los Angeles, and how the city...

Westward chronicles the history of basketball in the NBA and how the city of Los Angeles not only saved the fledgling league by bringing the Lakers from Minneapolis, but gave birth to the modern NBA with “Showtime.” Told through the lens of Jerry West, who helped build the dynasty of the Lakers, “Westward” now follows the former Hall Of Famer as he attempts to build a dynasty with L.A.’s other NBA franchise, the Clippers. Narrator ...