Pipeman in the Pit •
iHeart

Pipeman in the Pit

The Pipeman interviews Julian from the band called Decerebration. This is their first new music in 20 years. It started in the early 90s. Took a break in 1998. In 2009 they started a Facebook page. They wanted to write about what happened throughout their lives. Show growth and maturity. When they started writing music, they were kids. Listening to the new music is still brutal. They wanted to stay true to the death metal roots. They wanted to try to use clean vocals with unclean vocals. They wanted to add melodies to vocals and guitars. The new single out is infamous duality. The album is called follow the stars. Its about growing from the challenges In your life. You can reach them on all social media sites.

Pipeman in the Pit is a music and interview segment of The Adventures of Pipeman Radio Show (#pipemanradio) and from The King of All Festivals while on The Pipeman Radio Tour. The live show is broadcast live on W4CY Radio (www.w4cy.com), W4VET Radio, and K4HD Radio - Hollywood Talk Radio (www.k4hd.com) part of Talk 4 Radio (www.talk4radio.com) on the Talk 4 Media Network (www.talk4media.com). This podcast is also available on Talk 4 Podcasting (www.talk4podcasting.com).

Then there is The Pipeman Radio Tour where Pipeman travels the country and world doing press coverage for Major Business Events, Conferences, Conventions, Music Festivals, Concerts, Award Shows, and Red Carpets. One of the top publicists in music has named Pipeman the “King of All Festivals.” So join the Pipeman as he The Pipeman Radio Tour to Life right before your ears and eyes.
Read more
00:0000:00 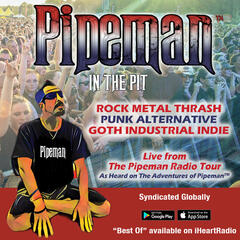