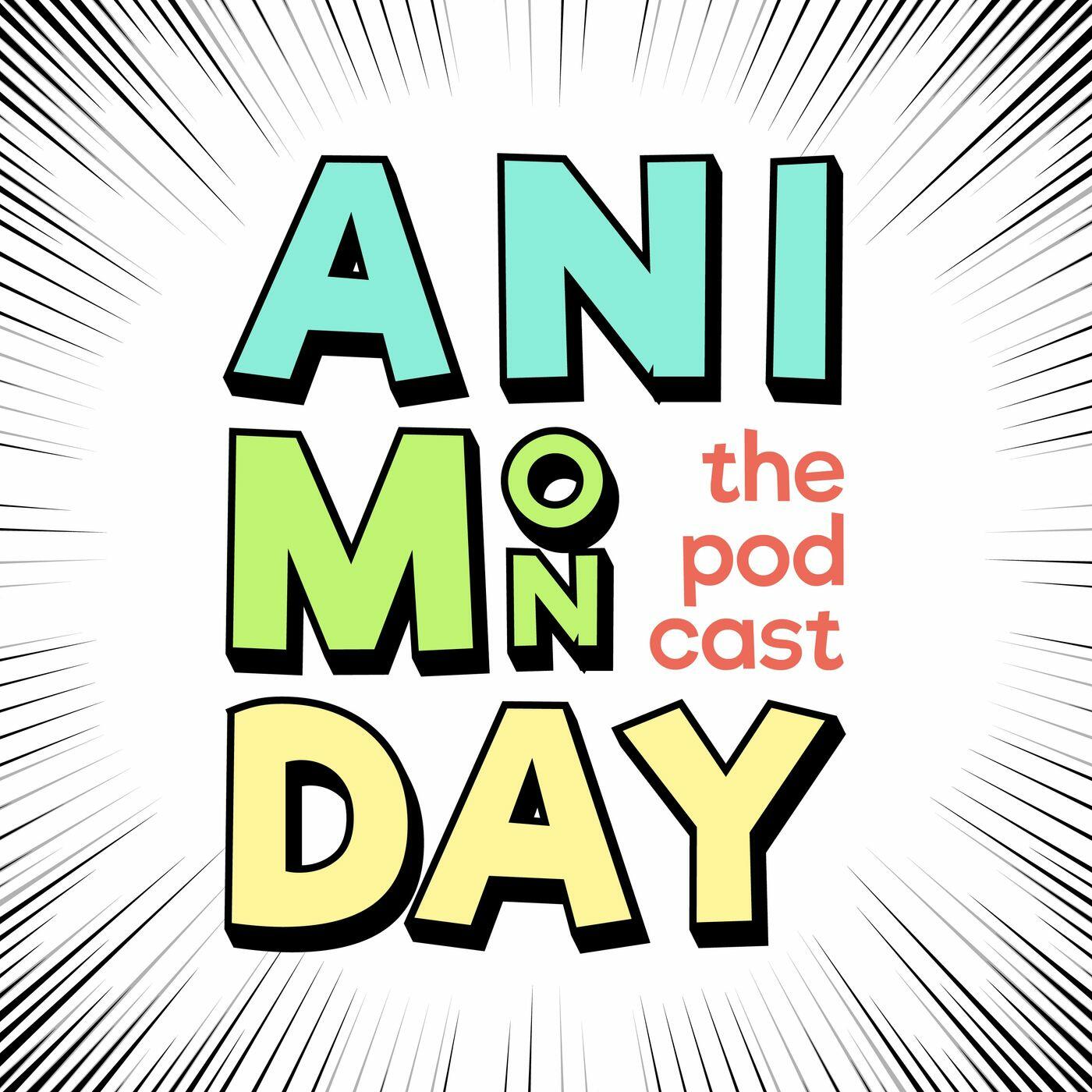 Each week we hit the "random" button on Crunchyroll and force ourselves to watch whatever shows up, then get together on Monday and discuss what happened! Co-hosts Colin and Kayla are a married couple who subject themselves to the best and the worst of anime by pressing the most dangerous button that Crunchyroll has ever provided. Their weekly selections range from absolute classics, to trash that nobody has heard of, to infamous titles that nobody wants to admit they've watched.... Show More

Episode 49: THE iDOLM@STER CINDERELLA GIRLS
April 28, 2020 • 43 min
Many will never make it past the audition phase, and their dreams will be left behind. Only a lucky few of these girls will get to experience their Cinderella story.
Share
Mark as Played
AniMonday Interviews: Kira Buckland
April 13, 2020 • 19 min
Kira Buckland is a voice actress for many popular anime and video game titles, perhaps best known for her portrayal of 2B in Nier: Automata. A handful of her notable anime roles include Reimi Sugimoto from JoJo’s Bizarre Adventure, Mary Saotome from Kakegurui, Umi Sonoda from Love Live, Julis-Alexia von Riessfeld from The Asterisk War, and most recently, Mitsuri Kanroji from Demon Slayer. In video games she is well know in the figh...
Share
Mark as Played
Episode 48: Shin Sekai Yori (From the New World)
April 6, 2020 • 43 min
Humans have developed telekinetic powers that will forever alter civilization and the world they inhabit. Two millennia in the future, five young students are about to discover that their peaceful world has been hiding a dark and violent reality.
Share
Mark as Played
Episode 47 Live from JoCo Cruise 2020: Kaguya-sama — Love Is War
March 16, 2020 • 36 min
This episode was recorded live from the Explorer's Lounge aboard JoCo Cruise 2020!

Everyone agrees that High school president Miyuki Shirogane and vice president Kaguya Shinomiya would make a perfect couple. But when it comes to the battlefield of love, confessing your feelings puts you at a clear disadvantage. Who will come out the winner in this game of love and pride?
Share
Mark as Played
Episode 46: R.O.D the TV
March 2, 2020 • 35 min
The freelance bodyguards of the Three Sisters Detective Agency suddenly find themselves intertwined with a once-famous author named Nenene. What they thought would be a straightforward job becomes a dangerous mystery that the girls might not be prepared for.
Share
Mark as Played
Episode 45: RErideD — Derrida, who leaps through time
January 27, 2020 • 44 min
An engineer named Derrida discovers a terrifying bug in the autonomous robots he helps design. Before he is able to apply a patch, Derrida's life is threatened by those who stand to profit from the bug. While running for his life, Derrida is Frozen in cryostasis for 10 years, and awakens to the robot hellscape that he helped create.
Share
Mark as Played
Episode 44: JoJo's Bizarre Adventure
January 13, 2020 • 40 min
Jonathan Joestar, commonly known as JoJo, lives a privileged and happy life under the care of his doting father. When a young boy named Dio Brando becomes part of the family, JoJo’s life is turned upside down. Jonathan knows that his new rival is up to no good, but doesn’t know quite how far Dio will go to steal wealth and power from the Joestar family.
Share
Mark as Played
Christmas Special 2019
December 25, 2019 • 19 min
Kayla and Colin return for their second annual Christmas special! This year, they'll dig back through the archives and watch any Christmas themed episode from the anime that they watched in 2019, including Hinako Note, Tribe Cool Crew, and Ninja Nonsense.
Share
Mark as Played
Episode 43: Big Order
December 9, 2019 • 44 min
Ten years ago, the world was shaken when the wish of a child named Eiji caused mass destruction. For the last decade, Eiji has managed to keep his mistake a secret, but now with his identity revealed, Eiji is forced to unleash his powers as an "Order". Eiji's desires will either lead to peace in the world, or to more untold destruction.
Share
Mark as Played
Episode 42: Kyo Kara Maoh!
November 12, 2019 • 44 min
For the first 15 years of his life, Yuri Shibuya believed he was like any other high school student. When he is accidentally transported to another world and finds himself at the center of a global conflict, Yuri must balance his normal student life on Earth and his destiny to become the Demon King.
Share
Mark as Played
Episode 41: DNA²
October 28, 2019 • 41 min
Overpopulation has become such a problem in the future that it is a criminal act, punishable by death, to have more than one child. This catastrophe can be traced back to a family carrying the powerful “mega-playboy” gene. A DNA Operator named Karin must go back in time to alter the DNA of the original mega-playboy, a high school kid named Junta.
Share
Mark as Played
Episode 40: Cells at Work!
September 30, 2019 • 63 min
Among the 37 trillion cells in your body, one little red blood cell is working hard for you! Her life is filled with nutrient deliveries, avoiding deadly bacterial attacks, and making new friends! She’s happy to do it though, because working is what cells do!

Be sure to check out Josh's website for info about his work, his music, and his art. [joshuasheehy.com](https://joshuasheehy.com "Joshua C Sheehy website")
Share
Mark as Played
Episode 39: The Garden of Sinners
September 17, 2019 • 45 min
*Content warning: this episode contains brief/mild discussion of suicide.*

A teenager named Shiki lives an unusual and often dangerous life, making it difficult for her to connect with her peers. When a classmate starts to pursue a friendship with her, Shiki doesn’t know what to make of it. These are the stories of how their two fates become forever entwined.
Share
Mark as Played
Episode 38: Magical Circle Guru Guru
September 3, 2019 • 41 min
A great evil has made its appearance in the world, and Nike (against his will) is chosen as the Hero to save everyone. He is joined by Kukuri, the only mage left of her tribe, in a quest to take on the Demon King. Their journey is full of new friends, magic, and monsters.
Share
Mark as Played
AniVersary 2019
August 20, 2019 • 44 min
To celebrate the first anniversary of The AniMonday Podcast, we present our top and bottom three for all of the anime that we've had to watch over the past 12 months. Will your favorites make our list for the best AniMonday selections so far? Will we put your guilty pleasure anime on blast by entering it into our list of the worst AniMonday rolls?

After presenting our list, we discuss how much we appreciate the fans who have hel...
Share
Mark as Played
Episode 37: Kamisama Dolls
August 13, 2019 • 43 min
Kyohei recently moved to Tokyo to escape the ghosts of his past and attend college. It won’t be long before the troubles he left behind catch up and threaten his peaceful new life. When an old friend shows up in Tokyo, Kyohei has to help his sister as she trains in the secret arts of the rural village where it all started.

Thanks to Sithu Aye for letting us use his music for the intro/outro of our show! You can find Senpai EP and Se...
Share
Mark as Played
Episode 36: Wakaba Girl
July 30, 2019 • 31 min
Wakaba has led a sheltered life, and finds herself both overjoyed and overwhelmed by her new role as a high school student. Despite her proper upbringing, Wakaba has a fondness for wild fashion and culture. Wakaba’s new school friends help her break out of her shell, and teach her what it means to be a normal girl.

Thanks to Sithu Aye for letting us use his music for the intro/outro of our show! You can find Senpai EP and Senpai EP ...
Share
Mark as Played
Episode 35: Ninja Nonsense
July 24, 2019 • 32 min
An apprentice named Shinobu is training hard to pass her ninja exams when she meets Kaede, a girl her age who is studying for normal school exams. The unusual pair become friends, and Kaede soon finds herself in the middle of ninja training grounds with her strange new friend. For a girl like Shinobu, training to be a ninja isn’t so much deadly as it is hysterical.

You can support Kyoto Animation and the victims of the arson attack ...
Share
Mark as Played
Episode 34: Tribe Cool Crew
July 16, 2019 • 48 min
Haneru is a middle school student with dreams of becoming a dance idol like his hero Jey. If he wants to make his dreams come true, Haneru is going to need the help of his new found friends in the Tribe Cool Dance Crew.

Thanks to Sithu Aye for letting us use his music for the intro/outro of our show! You can find Senpai EP and Senpai EP II: The Noticing on his Bandcamp and major streaming services like Spotify.

https://sithuayemusic....
Share
Mark as Played
Episode 33: Listen to Me, Girls — I'm Your Father!
July 8, 2019 • 32 min
Yutta is a freshman in college, trying to make ends meet in the big city. After the sudden loss of his sister and brother-in-law, he becomes the guardian of their three children, Sora, Miu, and Hina. Raising these three girls won’t be easy, and Yutta still has a lot to learn.

Thanks to Sithu Aye for letting us use his music for the intro/outro of our show! You can find Senpai EP and Senpai EP II: The Noticing on his Bandcamp and maj...
Share
Mark as Played