They say the personal is political. But the rivalry between Thomas Jefferson and Alexander Hamilton may be the most political of any relationship in history.

Hamilton is experiencing a well-deserved revival in recent years. His vision of America as an economic powerhouse with an aggressive government as its engine has found many followers. He helped get the Constitution ratified, found the Federalist Party, and served as the first Secretary of the Treasury. But Jefferson fought bitterly with Hamilton throughout their careers and articulated a very different vision for the new nation, promoting an agrarian democracy built upon geographic expansion—an "empire of liberty," he called it. These tensions remain embedded in the Constitution and in the debates that roil politics in America to this day.

Louis Masur is a Distinguished Professor of American Studies and History at Rutgers University. He received outstanding teaching awards from Rutgers, Trinity College, and the City College of New York, and won the Clive Prize for Excellence in Teaching from Harvard University. He is the author of many books including "Lincoln's Last Speech," which was inspired by a talk he presented at One Day University. 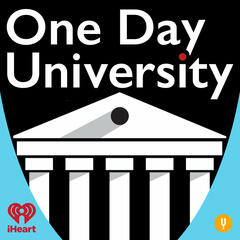