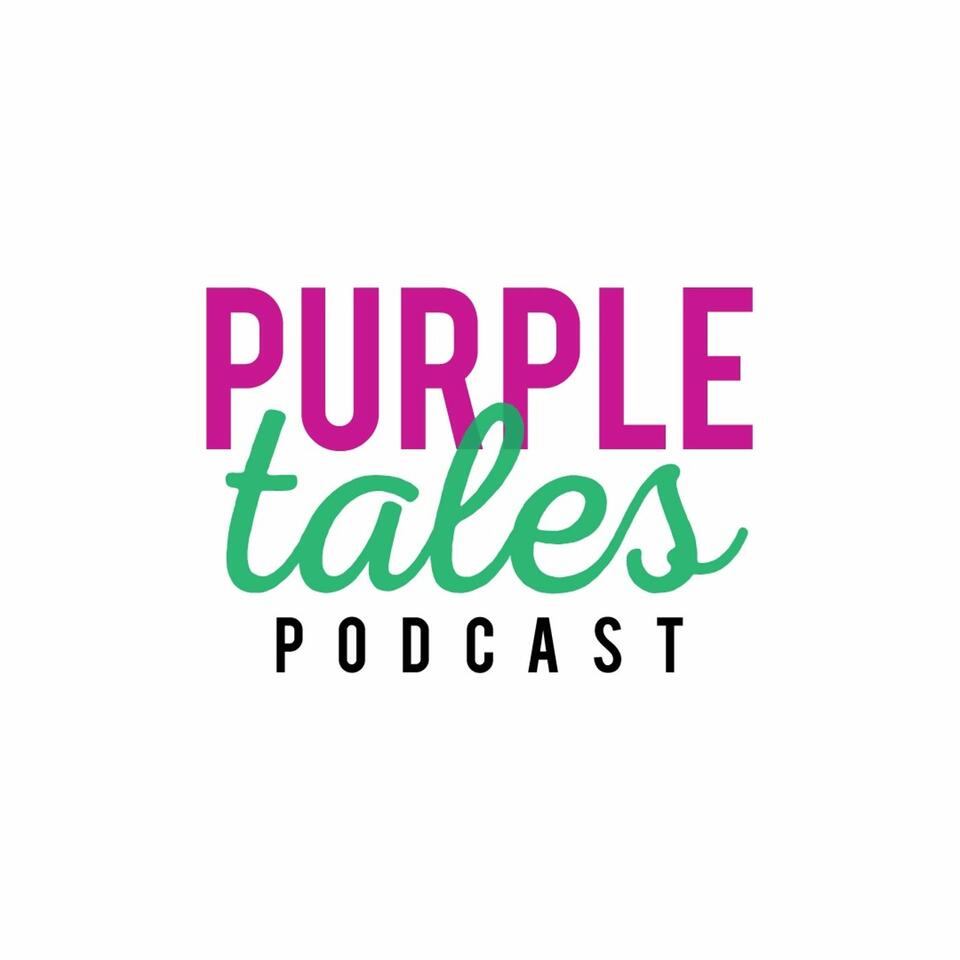 About Purple Tales Podcast The PURPLE TALES PODCAST celebrates the spirit of Barney as told through the talented people who created, produced and worked on all aspects of the cultural phenomena we know as America’s favorite purple dinosaur. The life lessons Barney has taught children since 1988 are recalled by the people who knew Barney best. Their stories and anecdotes provide a weekly reminder that the simplest of lessons can have a meaningful impact that lasts a lifetime. Your PURPLE TALES host is Carey Stinson ... to share their stories and anecdotes.Multi-media reporter and personality Nancy Jay defines her role with a quote from Irish actor Colin Mochrie: We all have a dinosaur deep within us just trying to get out. About Carey Stinson For more than thirty years, Carey Stinson has been in front of and behind the camera, first as Barney the Dinosaur on stage and screen, and now as an award-winning photographer. As Barney, Carey counts 1,500+ on-stage performances worldwide and more than 150 television and video appearances, including performances on The Today Show, Good Morning America, and Macy’s Thanksgiving Day Parade. Carey's Barney is responsible for bringing joy to tens of thousands of children and their parents through hospital visits and the Make-A-Wish Foundation. Today Carey's role is that of a professional photographer, drawn to the profession by the desire to capture meaning and beauty in everyday moments. He creates inspiration by focusing his lens on what we often overlook or take for granted. His fine art images serve as reminders that each of us is unique and surrounded by a life worthy of celebration and gratitude. About Nancy Jay PURPLE TALES co-host Nancy Jay has a global presence, seen and heard worldwide on U.S. Military bases as broadcast by the Army and Air Force Exchange Service television and radio networks. As a movie critic, Nancy has interviewed everyone from Oprah Winfrey to Ellen DeGeneres, Michelle Obama to Meryl Streep, Clint Eastwood to Robert Redford, Hugh Jackman to Sterling K. Brown. She has moderated press conferences for Jennifer Aniston, Sandra Bullock, Bradley Cooper, and directors Christopher Nolan and Peter Jackson, among so many others. While living in New York, Nancy was a researcher for The New York Times editorial board. She remembers covering the Barney phenomena as a television reporter in Dallas. Perfectly typecast, Nancy played a television news anchor on an episode of MONK on the USA Network. And if you listen carefully, perhaps you’ll recognize her voice in all the Albertsons commercials with actress Patricia Heaton.

August 6, 2019 • 60 min
Brian Eppes was eight years old when he landed the role of Michael in the very first video that started the magic: Barney and The Backyard Gang 1988. Now a criminal defense attorney, Brian’s memories cover five years of “edu-tainment” … and plenty of video clips to help him along.
Share
Mark as Played

July 30, 2019 • 53 min
Cast as Sarah at the tender age of eight, Hayden Tweedie appeared in seasons seven and eight, then hit the road in Barney's Colorful World Tour. Hayden shares lovely memories of pics with her Barney friends, including Demi and Selena.
Share
Mark as Played

July 23, 2019 • 53 min
Director Fred Holmes reveals true Barney magic with personal, behind-the-scenes rehearsal footage with Carey actually out of the suit. "It took a lot of work to make it look simple," recalls this Emmy-nominated director of 98 episodes of Barney & Friends and 53 home videos. From putting the kids through Barney camp to helping Carey negotiate the Barney suit, Fred has some amazing Purple Tales. As he remembers, "E...
Share
Mark as Played

July 16, 2019 • 55 min
Imagine being the on-set teacher for Barney's kids. For two seasons, Anne Marie Hurlbut tutored your favorite kids and shares her class notes to prove it. Going to school has never sounded like so much fun!
Share
Mark as Played

July 9, 2019 • 42 min
Carey and Nancy cull through the questions from YouTube and iTunes and everywhere you can find Purple Tales. The answers may surprise you!
Share
Mark as Played

July 2, 2019 • 55 min
Starting with Barney’s creation, former teacher Debbie Ries reveals how Barney grew from a simple idea to a worldwide phenomenon. No one had experience with sales and marketing but with a mapped out trajectory of what Barney could be, the iconic purple dinosaur was born.
Share
Mark as Played

June 25, 2019 • 49 min
You remember Min on Barney & Friends’ first three seasons! Today Pia Manolo Hamilton performs eight shows a week in The Lion King on Broadway … but Barney is always in her heart. It’s an inspiring Purple Tale of doing what you love and sharing it with the world.
Share
Mark as Played

The one and only Professor Tinkerputt is in the house! - Purple Tales Podcast Episode 16

June 18, 2019 • 72 min
Professor Erasmus Q. Tinkerputt, Barry Pearl created one of Barney’s most beloved pals; as Doody in 1978’s GREASE, Barry created one of Travolta’s favorite Thunderbirds. Barry regales us with his acting background and weaves a rich tapestry of Barney magic while keeping us in stitches (and plenty of show-and-tell).
Share
Mark as Played

June 11, 2019 • 49 min
Backyard Kid Derek turned rapper, Rickey L. Carter has been to hell and back since his Barney days. But he's a survivor with a powerful message of inclusion and diversity and, of course, that Barney magic.
Share
Mark as Played

May 28, 2019 • 68 min
Bob West calls himself “anonymously famous" but as the original voice of Barney, we call him super-deeeee-duper!
Share
Mark as Played

Episode 12: Who sees Barney as a big purple lump of love?

May 21, 2019 • 65 min
The brilliantly visual mind of production designer Bob Lavallee gives us new insight into the Barney magic.
Share
Mark as Played

Episode 10: Working with dinos and kids from a director’s point of view

May 7, 2019 • 63 min
Barney director Brian Mack shares stories from the set and working with an 11-year-old Selena Gomez.
Share
Mark as Played

Episode 9: Of course Barney had a publicist!

April 30, 2019 • 47 min
It’s the Business of Barney when Carey invites his former publicist Jackie Smith to share her Purple Tales. And Nancy reveals The Barney Principle of Business.
Share
Mark as Played

April 23, 2019 • 42 min
After playing Hannah on three seasons of Barney & Friends, Marisa Kuers Mailhes has plenty of Purple Tales to share about life on and off the set. And she still sings the “I Love You” song to her kids every night, which she performs for you, Carey and Nancy!
Share
Mark as Played

Episode 7: The Body and The Voice of BJ

April 16, 2019 • 71 min
It's truly a magical reunion when Carey welcomes both BJs --- Patty "the voice" Wirtz and Kyle "the body" Nelson --- to share their Purple Tales. How did Patty come up with the voice? How did Kyle handle her voice in his head? And how did BJ change their lives? The answers are right here, along with lots of laughs and love.
Share
Mark as Played

Episode 6: Love and a Simple Jazz Square with Shelley Aubrey

April 9, 2019 • 76 min
Step right, step back and do a little slide with host Carey "Barney" Stinson and Shelley "performance director" Aubrey as they bring Barney & Friends to life. It's all about connection and inclusion - and a whole lotta love - according to co-host Nancy Jay.
Share
Mark as Played

Episode 5: The Words of Barney with Head Writer Steve White

April 2, 2019 • 57 min
Who put words in Barney’s mouth and pep in his step? Head writer Steve White recalls the best of times and has Carey Stinson and Nancy Jay laughing out loud. You will, too!
Share
Mark as Played

March 26, 2019 • 70 min
Who knew Aerosmith's Steven Tyler is a Barney fan... and who knew a Barney player would wind up in a Beastie Boys tribute band! Soon everyone will know when host Carey Stinson and Josh Martin share tales from inside AND outside their purple suits, while co-host Nancy Jay lives out every kids' dream and spends an hour between two Barneys.
Share
Mark as Played