Welcome to the Employer Blueprint Podcast, and this week we are excited to present the Founder and Chief Executive Officer of Hooray Health, Shane Foss. When beginning his career, Shane spent four years in the military as a Scrub Tech, assisting surgeons, and this is where he found a passion for health care. After leaving the military, Shane went to work for Johnson and Johnson selling orthopedic implants and moved to Stryker Orthopedics after that. According to Shane, this is where his career really took off. At Stryker, Shane really enjoyed the team building and development experiences. While at Stryker, Shane also pursued higher education by attending and graduating from Rice University - Jesse H. Jones Graduate School of Management and as he mentions in the podcast, this gave him the entrepreneurial bug. After Stryker, Shane worked for Avalign Technologies, Inc. before buying a business called Zimmer Alliance, a distributor for Zimmer Orthopedic.

It was around this time that Shane had an issue with his back and had to go to a local Urgent Care facility. During that time his deductible hadn’t been met on his health insurance and after what he assumed would be a small fee, instead became a bill for more than $800. This shocked Shane, especially because he knew the facility was within his network. Shane called and negotiated the bill down to a comfortable amount, however he couldn’t help but wonder how many people would have just paid the bill. After some research Shane determined that it was more than 52% of Americans who would have just paid the amount, 8% would have negotiated another amount, and 40% would have let the amount go to collections. This research led Shane to start Hooray Health, which provides affordable alternatives to traditional health care plans, and helps to empower their customers to protect themselves against large balanced unexpected bills.

Enjoy this episode of The Employer Blueprint Podcast as Kyle and Shane dive into the many topics around Healthcare, Affordable Care Act, and the Healthcare industry. Be sure to subscribe to the podcast so you don’t miss any future episodes, and to find out more about Shane Foss and Hooray Health, be sure to visit their website, follow the hashtag, or call the phone number below. 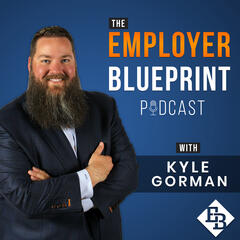