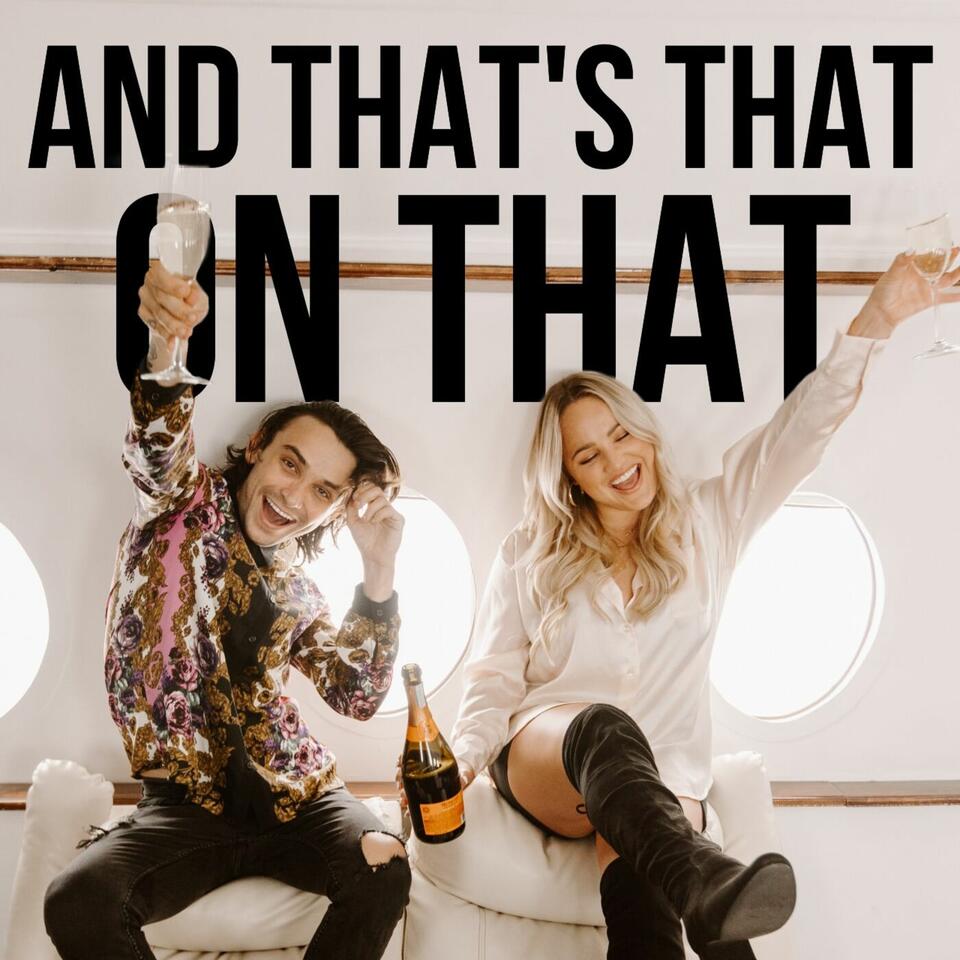 And That's That On That

Welcome to “And That’s That On That”! A monthly podcast hosted by Haley Chapman and Gavyn Bailey, two twenty-something singer/songwriters and best friends living in Los Angeles. After meeting in their early teens in their hometown of Orange County, CA, they began pursuing music...and the rest is history. Together they’ve been building their careers in entertainment ever since. Haley has worked as a publicist at multiple record labels, magazines and television/film production studios and is also an artist herself. Gavyn is a published singer/songwriter who has collaborated with established international artists such as Ray Dalton, Tim Schou, MOODY, SVEA, among others, and accumulated millions of streams and counting for his work as a co-writer. Join Haley and Gavyn as they journey through their 20’s and interview celebrity guest singers, songwriters, athletes, digital creators and successful professionals from all sectors of the entertainment industry! Tune-in the first Thursday of every month! And That’s That On That!

Annnnddd we’re back for EPISODE TEN! Our season finale! Can you believe?! To celebrate, we’ve invited our friend Lexi Aviles, a.k.a. "Love You Later," to join our final episode of the year. She’s an artist and songwriter absolutely killing it in the pop game right now. With upwards of 50k monthly listeners on Spotify, three killer EPs out in the world, including her most recent "Mouthwash,”––This is only the beginning f...

S1/E9: And That's On Going Back To School w/ Guest Kyle Reynolds

September 2, 2021 • 77 min
On this month’s episode (#9 - the second to last of this season!), Gavyn & Haley are chatting with the very talented singer, songwriter, producer and fellow Orange County native, Kyle Reynolds! In addition to being a childhood friend of Gavyn’s, Kyle is an accomplished and seasoned musician that just released his hit single with Griffyn, “The Best Is Yet To Come”. The song has already hit over 8 MILLION STREAMS on Spotify alone...
Share
Mark as Played

Remember when we said we would have an astrologer on the show?! WELL HERE SHE IS. Welcome to And That’s That On That, the founder of The CosmicRx...MADI MURPHY! Madi is an astrologer, intuitive healer, empowerment mentor, cosmic consultant, and the mind behind the CosmicRx birth chart that went viral earlier this year. CosmicRx has been named as one of the wellness industry’s top 100 luminaries and has been featured in publications...

Episode 7 is all about our deepest passion: the music industry! Gavyn and Haley have an in depth, candid interview with an industry professional that wears many hats in entertainment. She’s a songwriter, Gavyn’s manager, A&R, and an artist herself…but most importantly our greatest mentor and closest friend, ASHLEY MAIETTA! Listen to hear all about how we met Ashley, her journey through her career, and the best advice she’s ever...

S1/E6: And That’s On Mental Health

Let’s talk about mental health. Last month was mental health awareness month and on today’s episode we’re getting REAL about our own journeys and personal struggles with mental health, how we cope when times get tough, and why it’s important to talk about it. Plus, we’ve got another pit and peak that’s a little...SPOOKY. Join us for our most vulnerable episode yet...And That’s That On That! © 2021 And That's That On That. Produ...

Have you ever played 2 truths & a lie? Well, we’ve got a new segment in this episode that we like to call “2 FACTS & A FIB”. We promise you’ll get to learn even more about Gavyn, Haley & our amazing guest, Tim Schou! Tim is a singer/songwriter from Copenhagen, Denmark, and also one of Gavyn’s frequent co-writers. Gavyn and Tim wrote the hit song “Novocaine” together and the song now has over 1.7 MILLION STREAMS! Also, w...

S1/E4: And That’s That On Psychic Readings + A Listener Q&A!

EPISODE 4 BABY! Ever seen a psychic? Well...we did. This month, Gavyn and Haley have all new pit & peaks, answer questions from YOU, and tell a little story about their experience seeing a psychic together. All we can say is buckle up for this one...And That's That On That.  © 2021 And That's That On That. Produced by Gavyn Bailey and Haley Chapman.

S1/E3: And That’s On Being Ghosted w/ Guest SVEA

Guys…A HUGE THANK YOU for getting us in the TOP 50 on the Apple Podcast Music Interview Charts after only two episodes!!! We’re so happy y’all love it as much as we love making it. Now...Episode #3 is HERE and we’ve got a literal superstar guest for you that we’ve been wanting to have on the show since we dreamed this podcast up. She’s Sweden’s newest pop-queen, a platinum singer and songwriter, she’s gathered more than 70 million ...

Welcome back y’all!!! A HUGE thank you for all of the support on Episode 1, we’re so stoked to hear how much you guys loved it. Episode #2 is here and this week we’re diving into the sports world with a special guest, the third baseman for the Oakland A’s, Matt Chapman! Matt is a two-time Platinum Glove and Gold Glove Award winner, Fielding Bible Award winner, and the 2018 Wilson Defensive Player of the Year. Oh, and he’s Haley’s b...

Welcome to the first ever episode of And That’s That On That! In today’s debut episode, Gavyn and Haley take you through the wild ride that is their last 8 years of friendship, how the podcast came to be, and Haley explains how her week took a bit of a...tumble. PLUS, we have our first incredible guest, Ray Dalton! Ray is a platinum-selling singer-songwriter, two-time VMA winner, and a very good friend of ours. We chat all about hi...