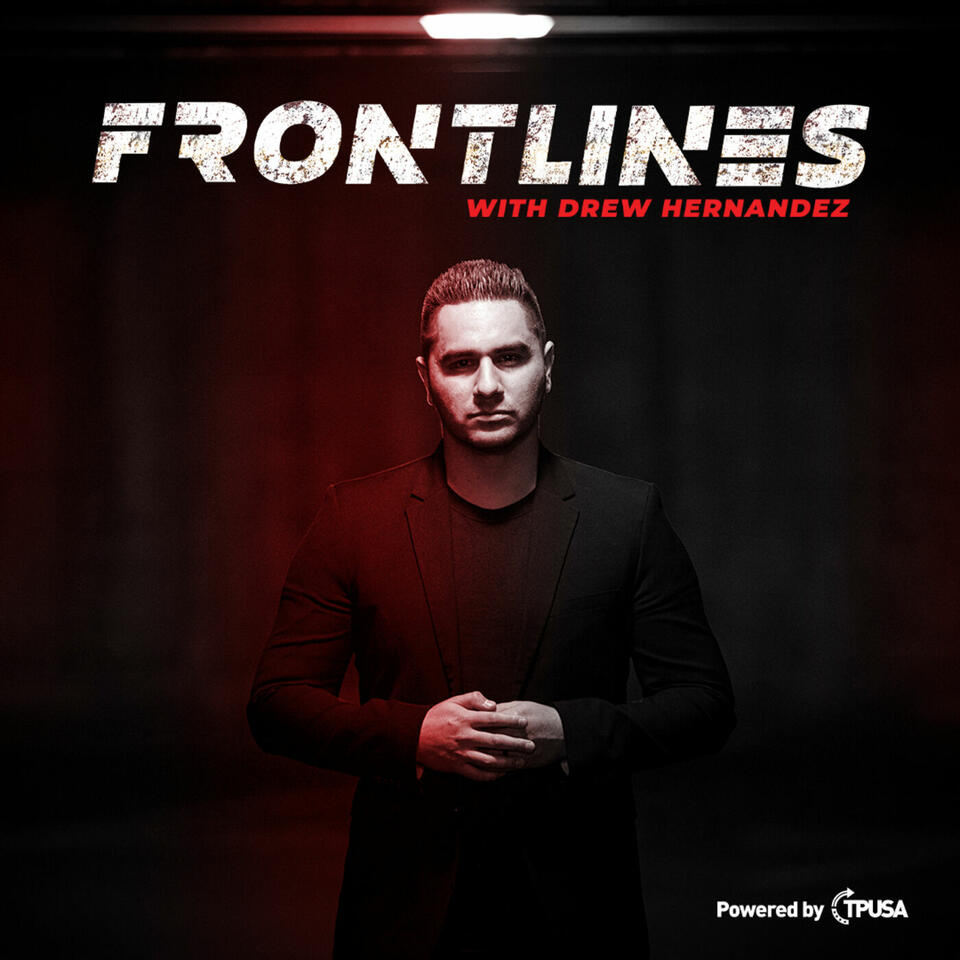 Investigative reporter and undercover video journalist, Drew Hernandez, has officially joined Turning Point USA as its newest contributor. Herdandez’s extensive resume includes breaking stories from the front lines of the BLM and ANTIFA riots of 2020, the horrors of human trafficking at the Southern Border, as well as covering political rallies, protests, and campaign stops spanning across the political spectrum. Hernandez will host a brand-new daily show, Frontlines, featuring breaking news stories revolving around his original reporting on some of the most explosive, consequential, and controversial stories of the day. Frontlines will also feature on-the-ground field reporting from Drew alongside other journalists who will join the show from across America, breaking important scoops and challenging dominant media narratives.

New York City is a complete mess and the leftist politicians are trying to ruin the once great city with an influx of illegal migrants. We sent down the great Frontlines reporter, Savanah Hernandez for an exclusive report on the NYC Migrant tents that were being built…stay tuned for her report! On top of this, free speech is gone in California. The Soy Boy of California, Gavin Newsom is now controlling speech in his new law! INSANE...

Thought Criminals, we have another wild show for you today! The State is pushing a full force sexual agenda against the innocence of your children! One of the leaders of this repulsive agenda, is the sex change simp, Governor Gavin Newsom. California is already a hellhole, and Newsom is focusing on minors having sex changes. On top of this Thought Criminals, Planned Parenthood is bending their knees to woke sexual indoctrinators wi...

Today on Frontlines, Drew is introducing Turning Point USA’s newest contributor and Frontlines reporter, Savanah Hernandez! The left is collapsing! Inflation is on the rise, President Biden’s numbers are tanking, and non-surprisingly latinos are being disgusted over the left's schemes and rhetoric.  On top of this, we have some of the craziest videos of the clown world simulation that we live in!

Thought Criminals, the White House is a literal clown show. President Biden and VP Kamala Harris had some very major gaffes in the past two days. Wait until you see these gaffes, insane! In other news, the state indoctrination camp of Southern California, called Cal State Long Beach has been in the news accusing the TPUSA chapter at CSULB of disrupting a leftist event. We have the receipts, so stay tuned!  On top of this, the LGBTQ...

Thought Criminals, we have a very special and explosive show today! The Rainbow Cartel went bezerk on Twitter after Netflix put the new Jeffery Dahmer documentary in the LGBTQ section, and of course Netflix bent the knee! The State controlled bots – Chris Wallace & Don Lemon’s shows are totally tanking – I wonder why???? Plus we have HUGE news coming your way, so stay tuned for the special announcement!

Since the overturning of Roe v. Wade, the left has been working overtime to keep the mass murdering of children called Abortion. This is Satanic and this is what we are up against! In Indiana, a Satanic Temple is fighting to keep abortion legal! Also, President Biden and his regime are in panic mode and people are waking up!! Leftists are allowing the living hell of crime to be rampant and Drew will expose all of those degenerate l...

Thought Criminals, Canada’s most infamous fake giant melons teacher has been receiving protests from students & teachers this past weekend. Also, we sent out our reporter, Kalen D’Almeida to hit the streets of Venice Beach to ask Californians their opinion on the sexually provactive teacher…stay tuned for that! On top of this, Latinos are rejecting the Left & the pedophile enabler, Hillary Clinton thinks Trump Supporters ar...

Today on Frontlines, Drew is joined by the one and only Alex Stein! They’ll discuss how the leftists want to breed your children into dumber and hypersexual soldiers of the State! Tune in to hear how California, New Jersey, and even a leftist school board in Florida are all in on controlling your children. We have some explosive stories today….on top of this, Drew and Alex will react to some CRAZY blue haired freaks. It’s going to ...

It’s 2022 and did you know that the roads you drive on are racist? And not only are roads “racist” – some people are actively calling for violence against white people. The word racism has literally lost all true meaning. PLUS the Left is STILL trying to redefine science. They want to “queer” sex-ed, whatever that means and make up lies about what a baby’s heartbeat in the womb really is. These people are psychopaths!!

The globalists are doubling down on the new world order! They are now calling for mandatory ESG scores for all businesses! DON'T LET THE STATE RUN YOUR LIFE! On top of this, a violent and angry thug decided to attack a TPUSA chapter event at the University of Iowa! Also, the rainbow cartel is in full motion as Matt Walsh is exposing a demonic trans clinic and trans freaks are celebrating gender surgeries being available for min...

Today on Frontlines, the FBI is being exposed again for corruption for removing agents off child sex abuse crimes to fight “domestic extremeism”. The Left’s political violence is rising as a conservative teenager was killed by a leftsit who hated him. DISGUSTING! Also, the State Controlled Bot Don Lemon was put into PLACE on live TV last night! On top of this, the Woke Whites are spewing their hate again in the classroom, stay tune...

The illegal migrants who were sent to Martha Vineyards have been deported by the woke white leftists. Pocahontas has spoken out against the illegals being in Martha's Vineyard. How racist of her! The mentally ill Rachel “Dick'' Levine is speaking out telling a crowd of deranged people that Trans youth is his inspiration! On top of this, a sexually perverted male teacher taught a class with prosthetic fake breasts! DISGU...

Our new Frontlines Reporter, Kalen D’ Almeida is back in the studio to join Drew as they both expose people who are not living in reality, but more of what Drew likes to call, a “Clown World.” They’ll take a look at more of the sexual indoctrinators who are trying to brainwash children at demonic drag shows. Plus, we have videos of people who simply cannot control themselves–we're talking about full grown adults, throwing tantr...

Drew is joined by streamer and political commentator An0maly, to discuss the state of Commiefornia. California is going straight to hell! Crime, homelessness, no freedom, & expensive prices are pushing the once golden state of California into Saul Alinsky's dream state! Today, they are going to break down some of the craziest stories including a teacher from San Diego saying Christians and White people are fascists. INSANE!

The little elf Mayor Lori Lightfoot & the very sweaty Governor J.B. Pritzker are allowing the bussing of unvetted illegal aliens to the streets of Illinois. These politicians don't care about their people and have pure hate in their heart! Disney has made another woke movie! Little Mermaid is now Black! Drew and founder of Geeks + Gamers, Jeremy Prime expose the real reason movies are becoming totally woke!

Today on Frontlines David Zere, host of Breaking Point, joins Drew live from New York City to discuss the 21st anniversary of 9/11 and what really happened on 9/11. On top of this, Drew announces a very special announcement to all the Thought Criminals. Frontlines has acquired a new reporter to join our show, stay tuned to find out who it is!

Today on Frontlines, Drew is joined by OANN host, Dan Ball to discuss the Brandon administration’s staff of NPC’s! Why does Biden hire demonic and total sexually perverted people? They’ll expose some of these losers today on the show. In other news the bartender, AOC, is on the cover of a major magazine saying America hates women! Is she drunk? The left is in total denial all the time!

Thought Criminals, the trans freaks spiraled into demon mode over in London and decided to pour a very interesting liquid on themselves! The left is losing their minds as a woman comes out as having the soul of an animal and being part wolf. Satanic! Also, California is a third world state now, as the lights are being shut off due to the con-man Gavin Newsom. This is what the Great Reset wants! Fight back against these evil people ...

Thought Criminals! Kathy Griffin and the repulsive Jennifer Lawrence are trying to be relevant again. Woke Hollywood only breeds the worst woketards ever. Also apparently,  1 in 4 leftists think Men Can Get Pregnant! INSANE! Also, the left is trying to cry racism over at Duke University and at CNN. While, the real racism is coming from the leftist controlled bots and we have some of their Tik Toks today to expose them!