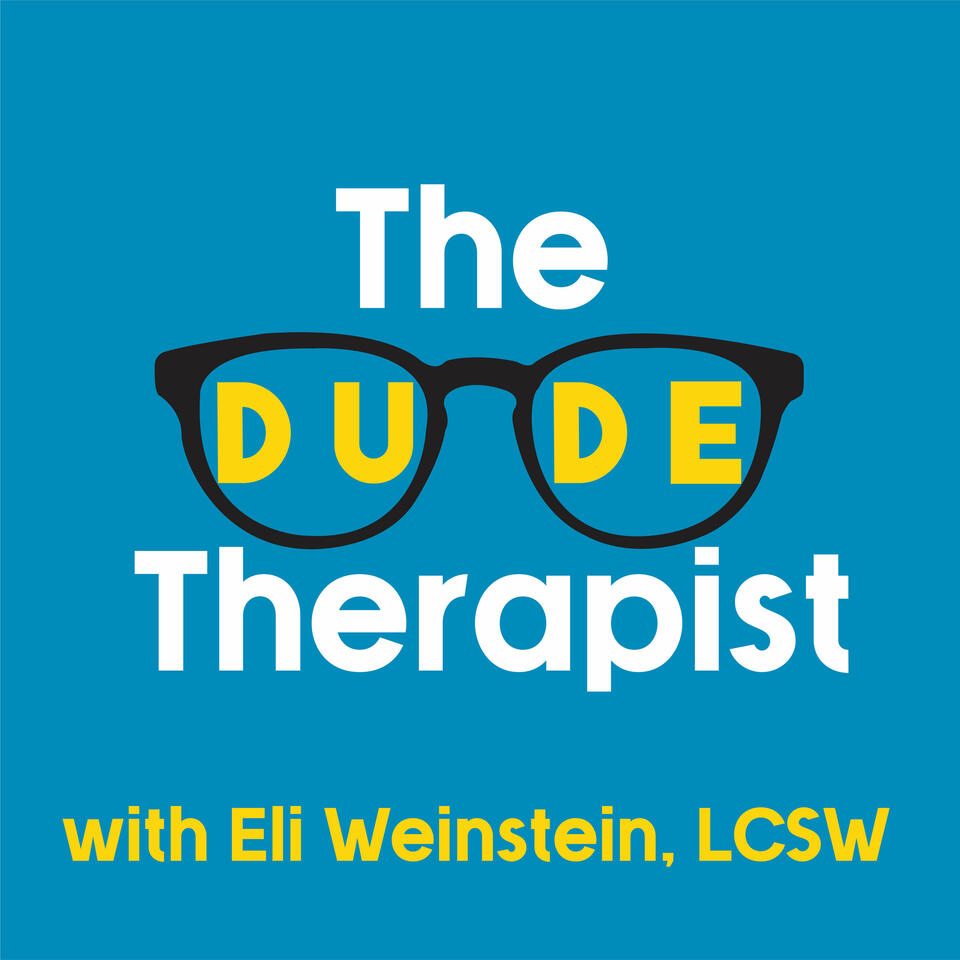 Let’s not reinvent the wheel- let’s replace it with the latest model and put a new spin on life! With a lack of male voices in the world of therapy, self-help, and parenting, The Dude Therapist Podcast will help fill the void and give men and women alike a safe space to have an open conversation and grow. As a trained therapist, I provide an informed, fun, and relatable male perspective on everything from mental health, men's issues, parenting, and just being a human. Whether you want to understand yourself or someone you know a little bit better, join me on this wild ride! Feel free to email or contact me at thedudetherapist@gmail.com or with topics, thoughts, or collaboration ideas! Follow me on Instagram @thedudetherapist and @eliweinstein_lcsw

Author. Speaker. Mental Health Expert and Ph.D. student Jay Barnett is on a mission to empower, inspire, and ignite fire in the minds of men and women across the globe, helping them become their best selves. Jay has been featured on NBC’s Hoda & Jena, The Breakfast Club, Wendy Williams, and Black Enterprise. He has emerged as the voice of mental health in the black community. Former professional football player-turned-marriage ...

Dr. Mariel Buqué is a Columbia University-trained Psychologist and intergenerational trauma expert. She provides wellness workshops for mental health and is the author of the upcoming book Break the Cycle, a book focused on healing Intergenerational Trauma. You may find her work at www.drmarielbuque.com and on social media at @dr.marielbuque.

Jake Ernst is a therapist, writer, and creator. Jake helps people make changes in their lives so they can live more creatively and courageously. Through his writing and creative content design, Jake helps people connect to their authenticity so they can deepen their connection with themselves and with others. Jake is the Clinical Director at Straight Up Health, a mental health clinic for young people and their families, and lives i...

Michele Borba, Ed. D., is the author of UnSelfie: Why Empathetic Kids Succeed in Our All-About-Me World and is an internationally renowned educational psychologist, and an expert in parenting, resilience, and character development. A sought-after motivational speaker, she has spoken in 19 countries on five continents and served as a consultant to
hundreds of schools and corporations including Sesame Street, Harvard, U.S. Air Force A...

How to move through and forward from your divorce? w/ Dr. Elizabeth Cohen

Dr. Cohen, a clinical psychologist, is the author of, Light at The Other Side of Divorce: Discovering the New You which debuted at #1 on Amazon in popular psychology.
She is the CEO and founder of the online divorce course and membership Afterglow: The Light at the Other Side of Divorce. Dr. Cohen is the CEO of the Center for CBT in NYC. Dr. Cohen’s online course teaches women how to heal, grow and thrive after divorce no matter how...

Do You Struggle with Toxic Positivity? w/ Whitney Goodman, LMFT

Whitney Goodman is the radically honest psychotherapist behind the hugely popular Instagram account @sitwithwhit, the author of Toxic Positivity, and the owner of The Collaborative Counseling Center, a private therapy practice in Miami, FL. She helps people who want to improve their relationships and emotional awareness.

Dr. Justin Puder is a licensed psychologist and content creator living in south Florida. He has a private practice where he primarily works with teens and young adults struggling with anxiety, grief, and trauma. Dr. J has built a community of more than 800,000 followers by creating content aimed to decrease the stigma surrounding mental health. He is passionate about representing therapy in a realistic light, which includes humor a...

How to Pause as a Parent w/ Dr. Michelle Deering

Dr. Michelle Deering believes that every mother and daughter should have a thriving loving relationship. This refreshing approach has made her a sought-after speaker, online educator, and consultant.

Daniel H. Pink is the author of several provocative, bestselling books about business, work, creativity, and behavior. His books include:

o When: The Scientific Secrets of Perfect Timing unlocks the scientific secrets to good timing to help you flourish at work, at school, and at home. When spent four months on the New York Times bestseller list. It was also a Wall Street Journal, Washington Post, Publishers Weekly, and USA Today b...

Dr. Sasha Hamdani is a Board Certified psychiatrist and ADHD specialist. In addition to her private practice, she had a robust social media following across multiple platforms where she provides accessible and accurate information about ADHD.

Coming Soon ,  a book about adhd self care in the fall!

The Weight of Gold and Learning to Pivot w/ Apolo Ohno

Reinvention is at the core of Apolo Anton Ohno. He acquired and honed this skill over a decade of Olympic speed skating competitions during which he became the most decorated US Winter Olympian of all time. Apolo continually adapts that performance mindset to support ongoing personal and professional growth. He has drawn on this acumen to become a global cross-industry entrepreneur, a successful sports broadcaster and television pe...

Mental Health Expert Dr. Peace Amadi, PsyD, is a professor, author, speaker, and trauma-informed coach who helps people heal and lead. From leaders, entrepreneurs, and content creators to pastors, parents, and educators, Dr. Peace is a coach and cheerleader to the people in our lives that everyone goes to.

She is the author of Why Do I Feel Like This? which hit #1 on Amazon’s New Releases in Mental Health. She is the Founder of The...

How to Accept Yourself and Your Anxieties w/ Ariella Azaraf, LCSW

Ariella Azaraf is a psychotherapist in private practice and speaker in New York City. She enjoys working with emerging adults struggling with anxiety, and depression, navigating relationships and boundaries as well as learning to cultivate a sense of self-love. With a unique lens of self-compassion and self-acceptance, Ariella feels passionate about helping and empowering individuals to work through struggle and trauma while also h...

Dr. Kathryn Stamoulis is a Licensed Mental Health Counselor and Educational Psychologist based in New York.  She is an expert in female adolescent sexual development and sexualized violence. In her role as a counselor, she has worked with both victims of sexual harassment and abuse, as well as perpetrators. She also teaches and has served as an adjunct psychology professor at Hunter College in New York City. She is a former preside...

Growing up in the era of Sex and the City and Bridget Jones, Kate Bee believed her drinking

was simply what successful, independent women did. After all, she was a journalist and TV

producer for the BBC - drinking after work was how people socialized. Except she was tired of

feeling hungover and ashamed about what felt like more drinking than was healthy.

When Kate decided to get sober, she was disappointed to find the only real sup...

Aliza Tropper, LMHC is a Licensed Psychotherapist for over 10 years. She has a private practice in Cedarhurst NY.  She works mainly with adolescents and adults who are struggling with anxiety, OCD, depression, relationship difficulties, life transitions, and trauma. She also runs DBT groups, for both adolescents and adults. Her website is alizatropperlmhc.com and you can also find her on Instagram @alizatropper.

How to Break Up with Your Anxiety w/ Kelly McKenna, LCSW

Kelly McKenna is a licensed therapist, specializing in helping millennial women and teens overcome anxiety. Kelly uses her platform on Instagram @sitwithkelly to provide educational and relatable content about anxiety. As someone with anxiety herself, she believes strongly in normalizing conversations around mental health. In addition to providing virtual therapy to anxious millennials in NY, NJ, and FL, Kelly also coaches othe...

Diana Hill, Ph.D. is a clinical psychologist and co-author of ACT Daily Journal: Get unstuck and live fully with Acceptance and Commitment Therapy. She is also a co-host of the popular podcast, Psychologists Off the Clock and offers regular teachings in compassion and ACT through Insight LA , Mindful Heart Programs, her blog on Psychology Today and on Instagram.

Krista Carlin (she/her) is a Registered Social Worker, ADHD Certified Clinical Services Provider and the Founder of The Curious Collective, a virtual psychotherapy practice based in Ontario, Canada. While she is a solo practice owner for now, she has dreams of connecting clients and clinicians to a collective of people who are passionate about neurodivergent advocacy and activism.

From exploring neurodivergence, to learning to live...

Blake Blankenbecler is a psychodynamic therapist specializing in anxiety, childhood trauma, and eating disorders. Blake has worked with folks from the west coast to the east coast and is now based in Charleston, SC where she has a private practice working with individuals helping them come into greater compassion and integration with their story, their body, and their emotions