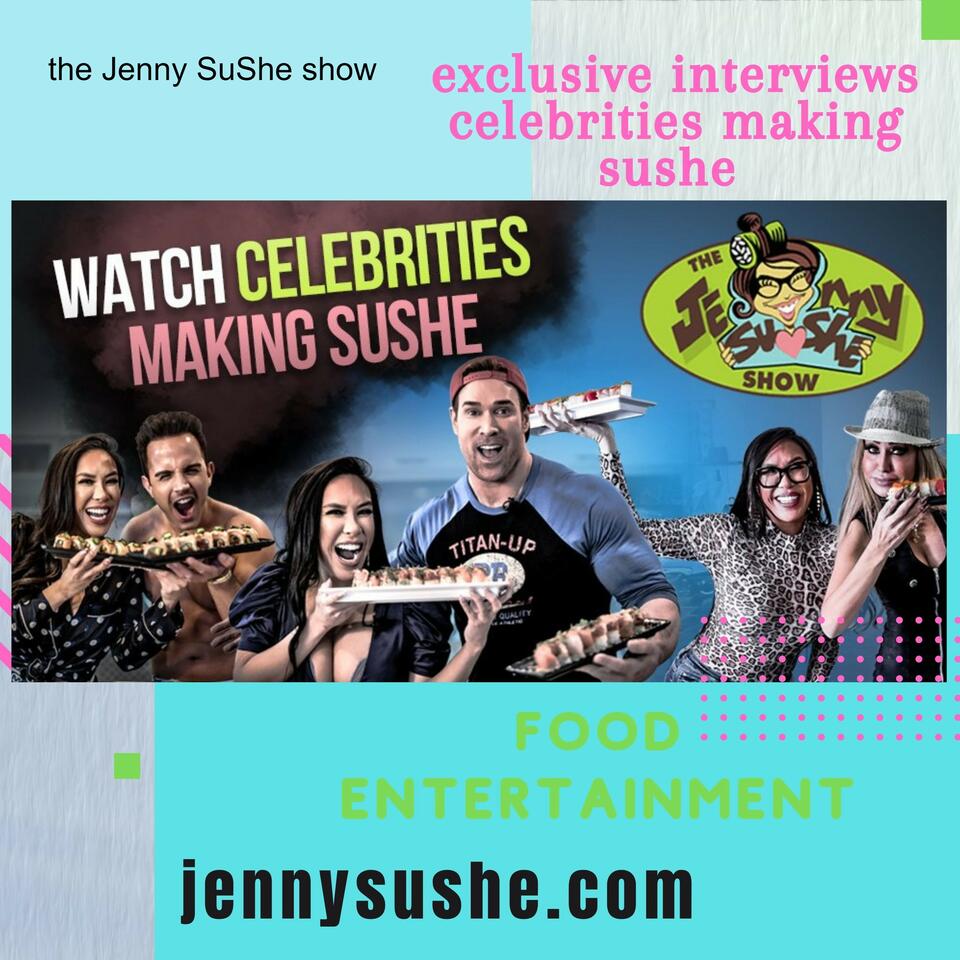 Jenny SuShe is known in the food and entertainment industry as a successful entrepreneur, TV personality, Playboy model, and celebrity interviewer. In season one of The Jenny SuShe Show she interviewed dozens of athletes and celebrities including Fia Johansson (Persian Medium), Brock O’Hurn (actor), Gabi Garcia (MMA Champion), Dr. Miami, Robert Ri’chard (actor), and Paul Teutul Sr. (star of American Chopper). Jenny SuShe combined all her passions and talents to launch The Jenny SuShe Show on Roku Tv, Amazon, IGTV, Facebook and YouTube channel which already has over 3 million views. Jenny prepares signature sushi creations with a celebrity guest at various locations. Listeners get the inside scoop on the lives of her celebrity guests while Jenny is teaching them how to create a signature sushi roll.

”I want to be gay and party for the rest of my life.” On Mekahel

Making suShe and interview with On Mekahel. Mekahel reveals that his ex boyfriend called it quits the day prior to filming because he wanted to "be gay and party forever". On gets personal and shares details of when he opened up to his parents about being gay right before filming his reality show "Putting On" on Revry Tv. On Mekahel is a famous Israeli actor, model, entrepreneur and LGBTQ advocate. When arriving to ...

Qveen Herby is internationally loved for her unique sound and talents which combine bouncing between vocals and rapping double digit syllables per second.  With her unique sound and appealing visuals on social media she is the Queen of designer hip hop with R&B vibes. Growing up in Nebraska she participated in a multitude of talent shows at the local strip mall, had a job at Dairy Queen and she worked as a wedding singer.

Ojani reveals how he emigrated to America with friends at the young age of 15 on a raft from Cuba. Talks about his marriage with super star Jennifer Lopez and also shares his is thoughts about upcoming Celebrity Boxing match with reality star Joe Gudice.  https://www.jennysushe.com/

PRO MMA fighter Jarrod Wyatt murders friend by ripping his heart out and throwing it in the oven.

WARNING ADULT CONTENT. WARNING this is a brutally violent murder also murder of an animal and drug use. THIS IS NOT FOR CHILDREN.

1st Murder and Mukbang episode.  About PRO MMA fighter Jarod Wyatt and how he brutally murdered his friend and sparring partner Taylor Powell.   WARNING this is a brutally violent murder also murder of an animal. This is not for children.

He has interviewed the biggest celebrities in Hollywood and has been in the industry for over 13yrs. Domenick tells me who his celebrity crush is and which celebrity he believes has the most influence. The Jenny SuShe Show. Check out The Domenick Nati Show.

Interview with women's PRO boxer Heather “ The Heat” Hardy before her upcoming fight with Amanda Serrano.  It was being dubbed the WOMENS BOXING SUPER FIGHT.  Streamed live on DAZN, Madison Square Garden. In the Hulu theatre.

R Kelly ex-girlfriend Faith Rodgers shares her hopes for the future after everything from suing R Kelly to participating in the Netflix docu series Surviving R Kelly.

I had the opportunity to do a phone interview w/ Reality Star Dr. Miami MD, President of the World Association of Gluteal Surgeons (WAGS).

Mortality rates w/ Brazilian Butt lifts are high bc of unskilled Surgeons. WAGS purpose is to educate the public and surgeons on better techniques and procedures.

Sushi Chef Jenny SuShe sits down with former WBA: World Boxing Association Super Bantamweight Champion and Current Contender Rico Ramos to discuss his upcoming bout vs Jessie Magdaleno which is being held at @The Hangar at the OC Fair and broadcast on ESPN this Saturday, March 23rd 2019. via ESPN.com: The fight represents a chance for both men to begin a quest for a belt in a second weight class.