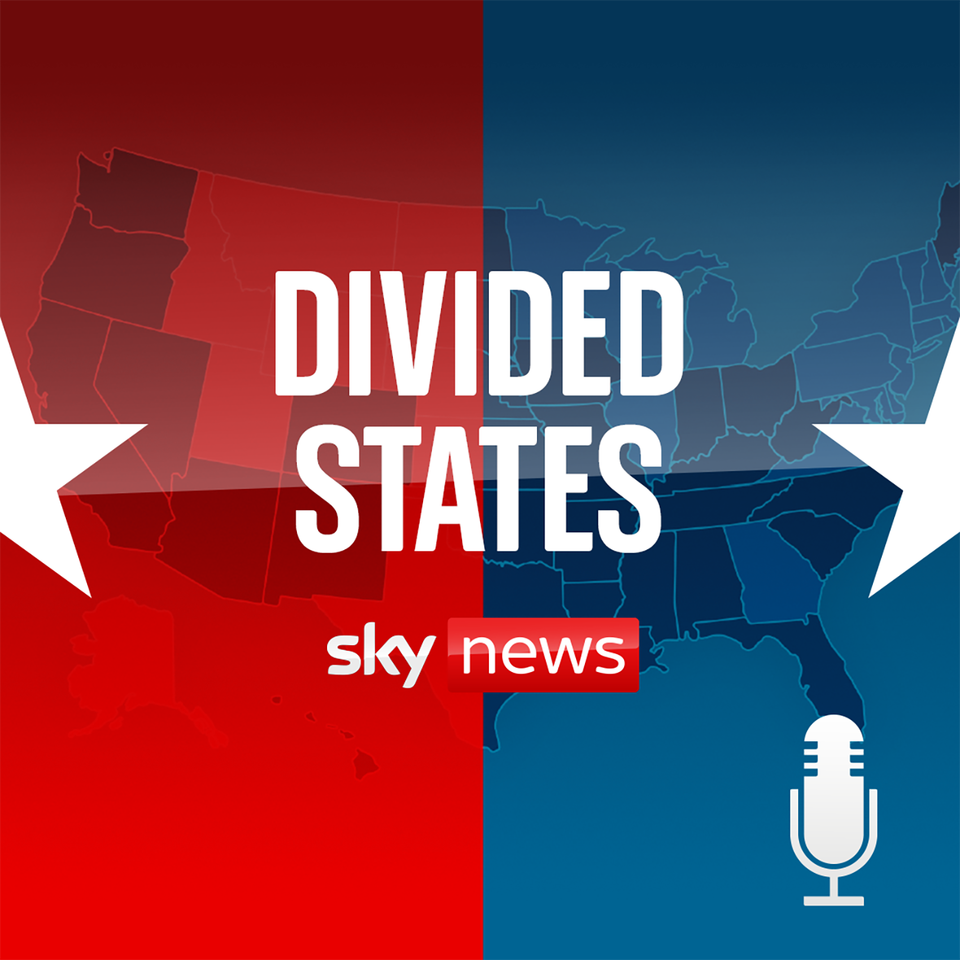 Divided States is the American politics podcast from Sky News looking at all the issues that divide the most powerful country on the planet.

Biden vs Putin: Is the Ukraine crisis one big bluff?

January 28, 2022 • 28 min
The headlines over the past month have been dominated by one issue: Ukraine. In this episode of Divided States, Sky News US Correspondent Mark Stone talks to the great-granddaughter of one of Vladimir Putin’s predecessors. Now a professor in New York, Nina Khrushcheva says the West continues to misunderstand the Russian psyche. And democratic strategist Mark Mellman defends President Biden against claims he’s botching another forei...
Share
Mark as Played

A trial that divided America: How Kyle Rittenhouse walked free

November 23, 2021 • 22 min
18-year-old Kyle Rittenhouse was on trial for murder - in August 2020 he’d shot and killed two men and wounded a third in racial unrest in Kenosha, Wisconsin. Last week he was acquitted on five counts. It's a trial that has divided America - the right are heralding him as a hero, while the left are condemning a justice system they say is flawed.

Abortion in America: Texas' 'heartbeat bill' and beyond

October 8, 2021 • 28 min
This week a Texas judge halted the so-called ‘heartbeat bill’ which bans abortions after 6 weeks, calling it “flagrantly unconstitutional”. But the ruling is temporary, and Texas has already appealed it. It’s already testing the landmark Roe v Wade decision made by the Supreme Court in 1973.

After recently going to Texas to report on the abortion restrictions in effect, the Sky News US team sit down to explain what’s happening with ...
Share
Mark as Played

August 20, 2021 • 34 min
It's been the most extraordinary week for Afghanistan, for Joe Biden and for America’s allies. Why was there such chaos in Kabul? How will this Taliban takeover play out - on the ground and in the White House? Can President Biden recover from this?

April 20, 2021 • 27 min
In a corner of southwest Detroit, there's a community that's spent years grappling with the air they're breathing in. The 48217 district has become known as Michigan's "most polluted zip code". There are more than two dozen pollutant-producing facilities owned by multiple companies scattered in and around the area, and residents say it's severely harming their health.

The story of the 48217 district bear...
Share
Mark as Played

Racist America: Will we see change?

March 19, 2021 • 29 min
Racism is persistent and pervasive in America's history and present, but what about its future?

US Correspondent Cordelia Lynch reflects on whether the US has reached a true turning point, with promises of institutional reform starting to come into effect, and the upcoming trial of Derek Chauvin throwing George Floyd's tragic killing into the spotlight once more.

All this in the context of Oprah's explosive Harry and Me...
Share
Mark as Played

What now for QAnon?

March 5, 2021 • 30 min
QAnon has gone from fringe conspiracy theory to mainstream news. The latest prophecy of the group was that Donald Trump would be inaugurated again on 4th March 2021. Of course, that didn't come to fruition. So, what now?

In the first deep-dive episode of a new Divided States series, US Correspondent Cordelia Lynch interviews former Q followers to understand its devastating impact, and talks to conspiracy expert Mike Rothschild a...
Share
Mark as Played

January 22, 2021 • 33 min
Joe Biden became the 46th President of the United States on Wednesday, and his VP pick Kamala Harris made history as the first black woman to hold such high office. Does a new administration mean a new era?

January 15, 2021 • 27 min
In the first fortnight of 2021 we have seen extraordinary events in the United States. After a violent pro-Trump mob stormed the United States Capitol, Donald Trump has become the only US President to be impeached twice. The security threat in Washington DC and other state capitals is at an all-time high as the country prepares to inaugurate President-elect Joe Biden.

December 10, 2020 • 40 min
It might be a year we'd all like to forget, but 2020 will need chapters upon chapters of history books written about it. Trump on trial, pandemic politics and a racial reckoning - all themes of an extraordinary 12 months.

US correspondent Cordelia Lynch and Washington bureau chief Emily Purser Brown reflect upon the moments that stuck out, with the help of Washington Post Senior Correspondent and author of 'Trump on Trial: ...
Share
Mark as Played

December 3, 2020 • 41 min
There are two tandem stories going on in America: a race for a vaccine and a President still trying to claim election victory.

This week Cordelia Lynch and Emily Purser Brown digest Sky News' interview with the White House's chief immunologist Dr Anthony Fauci, and talk to Chris Ruddy - the CEO of Newsmax, a channel which has garnered a new audience by airing the President's claims of electoral fraud.
Share
Mark as Played

November 26, 2020 • 23 min
It's Thanksgiving in the US - and with it comes one zany tradition: the official presidential pardon of a prize turkey. And it wasn't President Trump's only pardon of the week.

US correspondent Cordelia Lynch and Washington bureau chief Emily Purser Brown unpick developments in Washington, where a now lame duck president is formally transitioning out of the job, but continuing to question the integrity of the election.
Share
Mark as Played

A transition in limbo

November 12, 2020 • 30 min
Joe Biden is the president-elect, but Donald Trump is yet to concede. His loyalists are pursuing legal challenges, but we still haven't seen any evidence of electoral fraud.

US correspondent Cordelia Lynch and Washington bureau chief Emily Purser Brown discuss why Washington has gone quiet, the global response to a Biden/Harris White House and whether we can ever expect a concession speech from Donald Trump.

BONUS: President-elect Joe Biden – the man, the politician and the new FLOTUS

In his first speech since being named US president-elect, Joe Biden promised to “unify” the country and heal deep divisions.

But what more do we know about the 77-year-old, who, after his inauguration on 20 January, will officially become the next US commander-in-chief?

On this edition of the Sky News Daily podcast, Dermot Murnagha...
Share
Mark as Played

November 8, 2020 • 26 min
After a long wait, a victory in Pennsylvania helped win Joe Biden the presidency of the United States. While Democrats celebrated history being made, Donald Trump golfed, and his lawyers upped the ante on challenging the electoral process.

US correspondent Cordelia Lynch and Washington bureau chief Emily Purser Brown reflect on the day, the week, and the campaign that made this moment. What will a Joe Biden presidency mean for Amer...
Share
Mark as Played

Too early to call

US Correspondent Cordelia Lynch and Washington Bureau Chief Emily Purser Brown bring you this episode of Divided States from a tented roof in Washington DC to unpick the key moments of election night and debate the potential paths to victory for both Joe Biden and Donald Trump in the hours and days ahead.
Share
Mark as Played

BONUS: America Decides: How does the US election work?

November 2, 2020 • 34 min
From the Sky News Daily team: Will Donald Trump defeat Joe Biden to secure a second term in the White House? Or has his Democratic opponent done enough to win over US voters?

On this edition of the Sky News Daily podcast with Dermot Murnaghan, we hear from Americans Joe Radinovich and Samuel Mangold-Lenett on what the election means to them and who they want as their commander-in-chief for the next four years.

But how does a US elect...
Share
Mark as Played

Four more years? A Biden landslide? What could happen on election day?

October 29, 2020 • 30 min
Only five days to go until election day and the scenarios for what next week might look like are endless. A red mirage? A blue wave? Too close to call?

Will the last debate change anything?

October 23, 2020 • 36 min
The second and final presidential debate was a much more civilised affair - a win for the mute button perhaps, but also for the American public.

With less than two weeks to go until November 3rd, Cordelia Lynch and Emily Purser Brown unpick Trump and Biden's attack lines, and discuss whether the debate performances will actually matter with millions of votes already cast.

They're also joined this week by veteran Republican ...
Share
Mark as Played

October 16, 2020 • 36 min
He claims to be Covid-free, and President Trump is back on the campaign trail - but is he fighting a losing battle?

US Correspondent Cordelia Lynch and Washington Bureau Chief Emily Purser Brown discuss the state of the race with just over two weeks to go until election day, diving deep into key swing states Florida and Pennsylvania.

They're joined this week by Lieutenant Governor of Pennsylvania John Fetterman.
Share
Mark as Played