We talk about the most interesting experiences across seven years as Match Day host for the Black Caps, *that* one night he went out with Laura McGoldrick, Martin Guptill and Jesse Ryder in Nelson, making a living in the Wellington comedy scene alongside Flight of the Conchords and Taika Waititi, the best stories across a decade at 7days and what the future of comedy looks like in NZ.

1.34 Covid chat, similarities between Seamus and Ben: World Series Cricket and 90s rugby league trading cards, and a staple in the Holloway household from the late 90s through to present day

6.56 Seven years as the Match Day Host for NZ Cricket

13.38 A night out in Nelson with Laura McGoldrick, Martin Guptill, and Jesse Ryder

16.24 From small town Hawera to Victoria University: the making of Ben Hurley

24.11 Tracing the comedy journey: dying for the first time, riffing, and honing material over time

33.43 The Wellington comedy scene: Ben Hurley, some guys called Flight of the Conchords, and Taika Cohen!?

39.01 The importance of Pulp Comedy

41.36 Then and now: competition between New Zealand comedians and podcasts

45.07 Going to the UK and a Rose Matefao interlude

56.26 Crossing over into mainstream TV: The Project and the dream job on Seven Sharp

1.01.20 Cricket chat: the Comedians XI, commentating the World Test Championship with the ACC 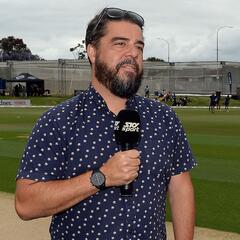