Chelsea Lane: How to make it in the NBA - Between Two Beers Podcast

Chelsea Lane's story is extraordinary. After working in NZ for over a decade as a physio and with high performance sport NZ, she got an email from the NBA champion Golden State Warriors in 2015, asking for her help.

Within a year, she was working with some of the biggest sport stars in the world as a performance therapist.

Within two years she was running the whole operation, leading a team of 25 as the head of physical performance and sports medicine at the Warriors.

Within three years she had two NBA Championship rings and was one of the NBA’s most coveted backroom staffers.

She was then headhunted by the Atlanta Hawks, offered an executive role and within five years of leaving New Zealand was the Vice President of an NBA franchise.

Now she's moved back home to NZ, and told us all about her incredible journey (and what its like being bffs with the world's biggest stars).

2.06 Tennis lessons, living life “off the grid”, being absent from social media, and ANOTHER Emma Twigg reference

16.57 Why did the Golden State Warriors chase Chelsea Lane?

19.45 Progressing through the ranks in the role

37.33 Is US professional sports as cold as it sounds?

42.31 In the huddle: pearls of wisdom from Steve Kerr and others

1.11.38 From hands on treatment to the boardroom: Shifting to the Atlanta Hawks

1.37.03 An interlude: Booking accommodation in Switzerland 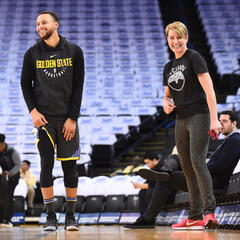