On this episode of Between Two Beers we talk to Chris Cairns.

Chris is one of the best cricketers NZ has produced. A powerful, big-hitting batter who could bowl as well as he could bat. For 15-years, Chris was an ever-present in living rooms across New Zealand smashing sixes and taking wickets on TV – a sporting hero.

But on the 19th of May, 2014 it was revealed Chris was under investigation for match-fixing allegations, and his life has never been the same. In 2015 he was acquitted of charges of perjury and perverting the course of justice after an eight-week trial in London's High Court and in his words “dug a hole in Australia, disappeared from the spotlight and got on with life”.

Then in August of last year he suffered a heart attack. He underwent four open-heart surgeries and had a spinal stroke, which left him wheelchair-bound and paralysed in his legs. Then in February he revealed he had been diagnosed with bowel cancer.

it’s been a hell of a ride.

In this episode we talk about why his brush with death has changed his perspective on life, and why he’s now open to talking about his trial, and things he wouldn’t have in the past, how he mentally coped with two months of hell in London, how it felt to have former teammates testifying against him, If he regretted suing Lalit Modhi, the realities of living with paralysis, what it was like growing up with Lance and what the future looks like.

This convo covered some pretty heavy areas, and a word of warning, there are a few graphic, raw descriptions of his health battle early in the ep. Chris’ life has been a real rollercoaster, and we’re grateful he felt comfortable and open enough to share so much of it in great detail.

5.41: How the cochlear implant changed communication with Lance Cairns

18.22: Waking up to the reality of being paralysed and reflecting on life after the injury

35.41: Looking ahead: getting back into work

43.57: Waiting for the verdict and the experience of sitting in the dock

50.33: Reflecting on the role of former teammates and the trial

57.09: His friendship with Dion Nash (and Pilates)

59.42: Telling the story with detail: A book on the horizon?

1.04.22: The transition from “son of” to New Zealand international

1.11.39: When did you realise you would be an international cricketer?

1.18.33: A look into the future and is Isabel Cairns a future tennis star?

1.23.25: A dad with a forgotten cricket career: T20 beige kits and a bowl-off with the West Indies 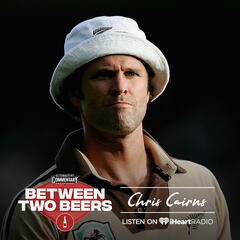