Dan Hooker has been a professional fighter for the last 13 years, forging a path to becoming one of the best UFC lightweight fighters in the world through kickboxing, Muay Thai, and mixed martial arts.

Dan gives us an insight into the realities of fighting for a living including reflections on dealing with head trauma, and all of his back catalogue in fight sports from featherweight all the way through to a heavyweight bout with an opponent who weighed over 130kg!

He also takes us behind the scenes of the UFC machine all the way from signing his first contract in 2014 at UFC Auckland all the way to the PPV cards and his upcoming fight at UFC 281, press conferences with Conor McGregor, and training with Israel Adesanya.

Dan is unique in the New Zealand sporting landscape. An athlete at the top of his field that calls it as he sees it. His thoughtful, introspective answers to some big questions revealed an incredibly likeable, warm guy.

1:34: An appreciation for Export Gold!

10:50: Tricks of the trade as a doorman in downtown Auckland

15:52: Frenemies and training with Israel Adesanya

24:37: Pre-combat sports Dan Hooker and the influence of The Ultimate Fighter

52:25: The aftermath of a big fight: Dustin Poirier and Paul Felder

57:48: Reflections on the management of a mixed martial arts career

1:21:47: The psychology of the weigh-in and the dynamic change with Conor McGregor on the card? 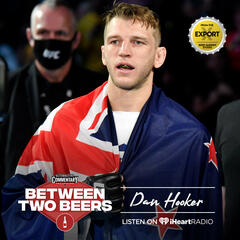