Dom was one of New Zealand’s most popular breakfast radio hosts from 2001 to 2021. He’s won the Sir Paul Holmes Award for NZ Broadcaster of the Year, written three best-selling books and has turned his passion for running into a new podcast called 'Runners Only With Dom Harvey'.

In this episode we talk about why he walked away from the Edge after 20 years to focus on his mental health, and what that really means, what his future looks like and what his ambitions are with his podcast, the complexities of working and living with his ex-wife JJ, his difficult IVF journey, the best and worst parts of working on the Edge and his Tom Cruise prank that had a sour twist.

JJ described Dom as a sensitive soul, who used his radio persona to mask that sensitivity. And we got the real Dom here. There were some emotional patches in this ep where Dom opened up on the struggles of his IVF journey, and we’re grateful he was comfortable enough to share. Dom is great company and a brilliant broadcasting talent – this was a super entertaining chat.

1.41 Dom gets flustered meeting his heroes

2.58 The art of the podcast and learning the craft

16.15 Basing himself on Howard Stern, and remembering Two Strangers and a Wedding

21.37 Back to the start of the radio journey in Palmerston North and a weird interlude about Kids Songs

30.51 The complexities of working and living with your wife

57.17 The tumour that led to the fertility issues

1.03.10 Making peace with not having children 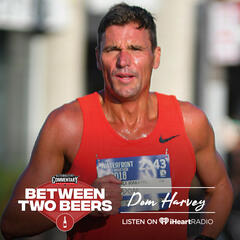