Eliza McCartney: My journey back to the podium - Between Two Beers Podcast

Eliza is a professional pole vaulter and one of the very best in the world.

She burst onto the scene as a 19-year old, taking home bronze from the Rio Olympics, before winning silver at the 2018 Commonwealth Games, and smashing indoor and outdoor Oceania records.

In this episode we talk about going to school with Lorde, the time she accidentally stumbled on a nude beach, why her coach made her tell a joke each week, her rise to the top of the pole vaulting world and the whirlwind of fame that followed her Olympic bronze.

Eliza's career has stalled recently with an unfortunate run of injuries that prevented her from competing at this year’s Commonwealth Games. We talk about the mental and physical struggle of dealing with injuries, and the inspiring rebuild that’s happening now.

Eliza is such good company and we both really loved this chat. In the second half we go quite deep on the injury situation, and you’ll get a really clear picture of what a tough few years it's been for her. This was actually her first ever podcast appearance, and we’re really grateful she came on to share her story.

1:43 Steven’s pole vault research comes to the fore off the back of the Commonwealth Games

4:20 Growing up with Lorde and Eliza’s childhood sporting background

13:01 Some thoughts on Chelsea Lane and that time she lead Eliza astray in Vancouver

18:44 From North Island Champs to World Juniors: The rapid rise to success in pole vault

33:30 Expectations and on the day preparations

37:08 Day two of Rio and claiming the bronze medal

47:03 The medal ceremony and blowing up on social media like Pita Taufatofua

50:16 A cheeseburger challenge interlude with Seamus and Roland Jeffrey

51:21 Reflection on the bronze medal success and the whirlwind on Eliza’s eventual return to New Zealand

1:10:45 Navigating the challenge of having to share your battles publicly with friends and family

1:27:35 The social campaigner and environmentalist with a deep appreciation for Te Ao Maori

1:35:24 The Italian Job: on the kite foil Olympic campaign trail with Lukas Walton-Keim 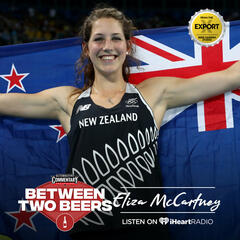