Hayley Sproull is one of New Zealand’s top entertainers and definitely one of the busiest!

She is co-host on ZM's hugely popular Fletch, Vaughan and Hayley Breakfast Show. She has been co-host of The Great Kiwi Bake Off and more recently the host of comedic current affairs show Have You Been Paying Attention? She plays the lead role in the kiwi sitcom Golden Boy which premiered in 2019.

A graduate of Toi Whakaari: NZ Drama School, her original passion was for theatre and comedy which lead her to create a number of successful comedy works, including 'Miss Fletcher Sings the Blues', 'Tighty Whiteys', 'Milky Bits', and 'Vanilla Miraka', earning her an array of praise and accolades.

She has been a writer on many series including Jono and Ben, 7 Days and Funny Girls, with a weekly segment Hayley Bailey featuring on the Jono and Ben show.

Funny, smart, musical and driven, we were blown away by how good she is at so many different things!

1.41: Busy, busy, busy! The busiest woman in the industry

5.28: Breakfast radio: Pulling the fingers at Jono and Ben every morning

10.36: A closed circle of friends…except for Sam Sproull: Hayley’s Comet and Talk Teddies

35.15: A look into the early making of Hayley Sproull

38.51: Creative projects: Miss Fletcher Sings the Blues, You Make Me Feel like a Natural Woman, Tighty Whiteys, and Milky Bits

54.34: Writing for Jono and Ben and Hayley Bailey

59.30: A brief look into the world of Hayley Sproull’s DMs

1.04.59: Moving into prime time: co-hosting The Great Kiwi Bake Off, hosting Have You Been Paying Attention? and acting in Golden Boy

1.10.23: Have You Been Paying Attention? It’s more than just hold and lean

1.33.35: Bits and pieces: dating Greg Grover from Nova, System of a Lounge, and being a goth girl at high school

1.38.43: Using her platform to push topics: having PCOS and a Simon Bridges joke on 7 Days that took a turn 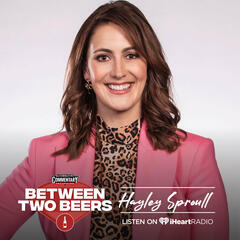