In this episode we’re winding the clock back two years to when we sat down with Matt Heath in November 2020.

Matt was one of the first ‘big names’ that gave us his time when we were finding our feet in the podcast game, and we loved this one.

Matt is an actor, producer, sports commentator, columnist, musician and radio host and can be heard hosting the Radio Hauraki breakfast radio show alongside Jeremy Wells, as well as commentating sport and smut with the Alternative Commentary Collective.

We talk about Matt’s humiliating experience at Laura McGoldrick’s wedding, his reflections on playing Danny Parker in Back of the Y Masterpiece Television, how his ‘fake’ band Deja Voodoo got a record contract, the time he made Jaquie Brown cry, the realities of working on breakfast radio and much more.

1.49 Matt politely declines a beer after four hours broadcasting and a big weekend in Taupo

2.48 The time Seamus met Matt at Laura McGoldrick’s wedding and Matt got bullied into performing Deja Voodoo “Beers” at the reception

5.21 The time Steve joined the Matt and Jerry Show to talk the Kipchoge Challenge and got an insight into the realities of commercial radio

10.03 Balls of Steel UK and the time Matt and his mates slagged off their director unaware their mics were turned on

20.06 Could the show exist in 2020? A recap of some of the more significant stunts and the end of the show

30.03 Reflecting on Back of the Y and Deja Voodoo

36.58 The jump to radio via and mainstream television, and the journey from bFM to Radio Hauraki

46.40 “Changing lives”: Linking up with Jeremy Wells and creating The Matt & Jerry Show

53.38 Vinewood Animation and winning awards with Fire in Cardboard City

56.17 Baz Heath: The apple doesn’t fall far from the tree 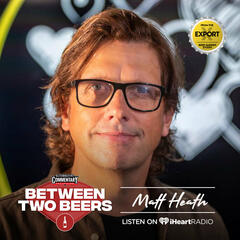