Petra Bagust: 30 years in the spotlight - Between Two Beers Podcast

On this episode of Between Two Beers we talk to Petra Bagust.

Petra was one of the biggest stars of New Zealand television for 18 years. She burst onto the scene as a 22-year-old co-host of cult classic Ice TV, and walked away as host of NZ’s biggest gig on Breakfast, aged 40.

Since then she’s started her own popular podcast called Grey Areas, and is a media chaplain.

In this episode we talk about her rapid rise to fame in the late 90s,  why she had such a difficult time hosting Christmas in the Park with John Hawkesby, why ICE TV was so successful, reflections on ‘Petra the Virgin’, her shows that bombed – and why they didn’t work, Seamus reveals his 20-year old crush on Petra, we talk about the current media landscape and much, much more.

Petra is such a smooth communicator. She seamlessly switches from a witty gag to a heartfelt piece of wisdom, and it will quickly become apparent why she was the most in-demand host on TV in New Zealand for so long. We laughed a lot in this one, Petra is five-star company and this was a blast.

51:54: Travelling the world as a newly married couple

1:29:27: Media chaplaincy and thoughts on the current media landscape 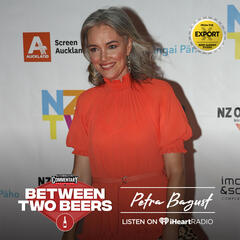