Ric started his career as a journalist with TVNZ before becoming the All Blacks’ first ever media liaison officer in 1992. Prior to that he pioneered sports media coverage producing the behind-the-scenes documentary The Good, the Bad and the Rugby which kickstarted a series of follow ups over the years.

After four years inside the All Blacks camp he then created, and hosted the wildly popular Sports Café, a cult hit which ran for 11 years creating some memorable TV moments and turned Marc Ellis and Leigh Hart into household names. He then moved behind the camera as the executive producer of The Crowd Goes Wild, which has been running for 16 years.

Now based in New York working in Major League Rugby, Ric shared some of the best bits from his career.

1.47 Rugby New York and the realities of Major League Rugby

6.10 Moving to the US to “get away from rugby” and what the All Blacks can learn from US sport

25.10 The first ever All Blacks media liaison officer

41.18 The original All of Nothing series: The Good, the Bad and the Rugby

45.24 The origins of Sports Café: “…after being the media liaison officer everyone hated me…”

1.03.43 Going behind the camera with The Crowd Goes Wild and letting go 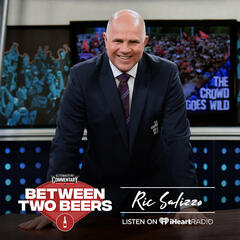