Ross Taylor: My side of the story - Between Two Beers Podcast

We talk to Ross Taylor about the response he’s had to his new book ‘Black and White’, the joy of dominating schoolboy cricket with a teenage Jesse Ryder, the hidden agendas which led to him being ousted as Black Caps captain, becoming an overnight millionaire in the IPL auction, the best memories of the late Sir Martin Crowe, deep convos with Kane Williamson, what life after cricket looks like and much, much more.

4:06: The journey after launching the new book Black and White

10:23: The process of writing the book and pulling out transcripts after eight years

13:25: The fallout after the first five days

14:54: Will Ross Taylor still pay for half of Seamus’ wedding?

19:58: Opportunity costs and getting used to life at home

26:41: The change in Ross Taylor from the start of his career to the end

27:57: Rising through the ranks at Central Districts and growing up with Jesse Ryder

36:48: Early sponsorships, why Ross could never play rugby, and being available for domestic cricket

56:11: Similarities to the Ian Foster All Blacks coaching situation

1:30:28: A conversation between Ross Taylor and Kane Williamson

1:46:25: Some quick yarns the boom box in the Long Room at Lords, Peter Andre’s Mysterious Girl, and a near miss in St Kitts 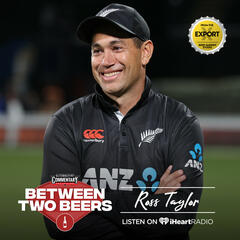