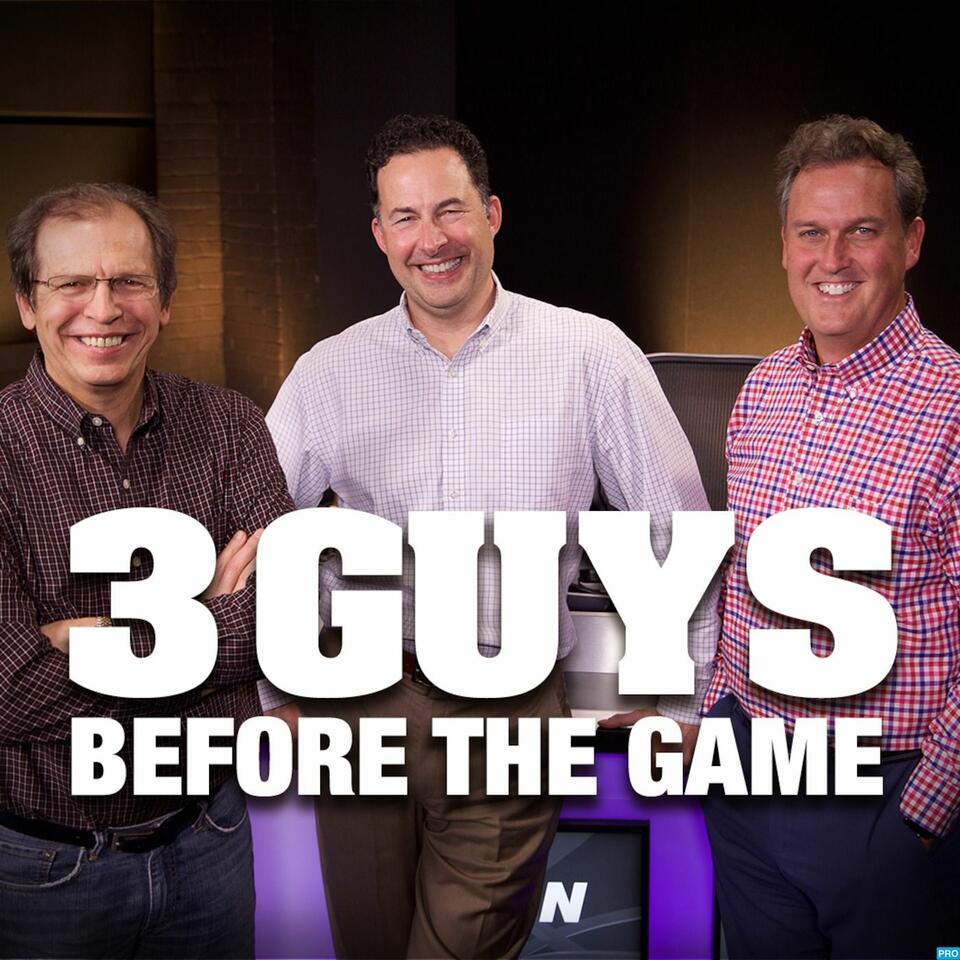 Three Guys Before The Game

Three Guys Before The Game is the most listened to podcast covering West Virginia University football and basketball. Tony Caridi, Brad Howe and Hoppy Kercheval talk all things Mountaineers.

August 5, 2022 • 53 min
You can’t have a Backyard Brawl without another team. So what’s going on with Pitt football?

That’s the question Hoppy and Tony posed to Pat Bostick. Do you remember Pat? He currently serves as lead fundraiser for the Panthers athletic department and color analyst on the Pitt radio network.

Oh yeah. He also quarterbacked Pitt to its infamous 13-9 upset victory over WVU in 2007.

In this episode, Pat gives his take on the Panther...
Share
Mark as Played

The WVU football team has started practice with its opening game now 31 days away.

In this episode, Hoppy and Tony share Neal Brown's opening press conference comments and sprinkle some preseason nuggets and diet tips. (Who knew about intermittent fasting?)

The crew discuss the ongoing TBT event and Myers' professional career which is flourising.

It's a fun and entertaining episode from the capitol city.
Share
Mark as Played

It's been 14 years since the kid from Alabama took a sledgehammer to the college football record book. His combination of blazing speed and elite competitiveness led the Mountaineers to 42 wins in four seasons.

Along the way he became the first quarterback to ever start and win four consecutive bowl games and ended his career as the nation's all-time leader in rushing yards by a quarter...
Share
Mark as Played

It happened in middle school and Mike Florio admits it made him a different person.

Today, the Wheeling native is among the most influential media members who cover the National Football League. From the 10-million monthly visitors to his website (www.ProFootballTalk.com) to the viewers who watch him daily, Florio's voice has become synonymous with the NFL.

July 5, 2022 • 74 min
Nathan Adrian knew the non-stop pain wasn't something that would just go away. He had played with a torn rotator cuff as a senior at WVU. But the pain he was experiencing was different.

The Morgantown native is back home and feeling healthy again. A double sports hernia ended his debut season with the Brindisi franchise in Italian Seire A.

Before the injury, Adrian had proved he could play in Italy'...
Share
Mark as Played

The Big Ten western expansion into the Pac 12 is the single largest move to date in the ongoing reshuffling of college sports teams.

In this emergency episode, the "Guys" share their thoughts on the news and how it will impact West Virginia University.
Share
Mark as Played

In that time, she assembled her staff, built a roster, held a kid's camp and finalized plans to move into her new home. (Yes, she's been BUSY)

In this episode, the "Guys" learn what makes Coach "P" tick. She explains her philosophy of the game, her love of practice and what intrigue...
Share
Mark as Played

June 21, 2022 • 91 min
It's been over 25 years, but his name still covers the all-time Top-10 passing statistics in West Virginia football history.

Chad Johnston's story is the one you see in movies. The small town kid who grows up to play at his home state university. He created memories that won't be forgotten, like the touchdown pass in the final seconds to beat Pitt. (Johnston was 4-0 against the Panthers)

How could he and his wife Amanda get across a surging river in New Zealand to make it back to civilization?

That's just one of the many stories told in this Summer Series episode of Three Guys Before The Game. Brad Howe and Tony Caridi dig deep into Mazey's career as a player and coach.

Why did Randy cry on Mother's...
Share
Mark as Played

Nearly 30 years after playing his final game as a Mountaineer, the Martinsburg native is still in the top-8 all-time in assists and three-point percentage. Oh yeah, Basey also played professional baseball while attending WVU.

The former Mountaineer and NFL veteran, turned player agent, has cause to celebrate. He recently negotiated the largest signing bonus for a defensive-back in NFL history.

That $84 million dollar contract is just one of many topics the "Guys" talk about in this episode.

The WVU Hall-of-Fame member also shares his thoughts on the current state of the Mountainee...
Share
Mark as Played

May 24, 2022 • 50 min
The game was over. He walked into an empty broadcast booth at Mountaineer Field and screamed. (He really screamed)

That's how Clarksburg native and retired ESPN play-by-play announcer Mike Patrick dealt with No. 2 West Virginia's 13-9 upset loss to the Pitt Panthers in 2007.

Patrick had just broadcast the game, and like all Mountaineer fans, was in stunned disbelief.

That memory is just one of many Patrick shares with the...
Share
Mark as Played

Three Guys Before The Game - Wes Ours Visits (Episode 378)

May 16, 2022 • 90 min
At somewhere between 285 and 300 pounds, Wes Ours steamrolled down the sideline to score the first touchdown in Don Nehlen's last-ever football game.

It remains one of the most iconic plays in West Virginia football history.

The "Wes Express" keyed WVU to a Music City Bowl victory over Ole Miss. More than two decades later, Wes Ours is still involved in the game he loves.

In this episode, Ours joins Brad Howe and Tony ...
Share
Mark as Played

May 12, 2022 • 96 min
Magic Johnson fired the ball to Dale Blaney. The rookie guard for the Los Angeles Lakers zipped the ball to Kareem Abdul Jabbar who quickly spun and lofted his patented skyhook.

Magic to Blaney to Jabbar. (Swish)

It sounds and looked good, but it just didn't feel right.

The future WVU hall of fame selection walked away from the Lakers? His true love was auto racing.

On this episode, the under-recruited native of East Hartfor...
Share
Mark as Played

You'll never guess how and where WVU great Lowes Moore signed his national letter of intent.

More than 40 years after his final game in Morgantown, Lowes Moore still hears the Coliseum crowd. That's the reason he chose West Virginia.

How did Bob Huggins treat the freshman Lowes Moore? How did a coaching change imp...
Share
Mark as Played

May 5, 2022 • 87 min
Jedd Gyorko used to walk around major league baseball stadiums before a series began.

He wanted to fully embrace the reality that he had made it to the game's highest level. He respected the game and never took his position for granted.

In this episode, the "Guys" pepper Jedd with a series of questions about the game within the game in the big leagues. From pregame rituals to high-altitude poker games, this episode to...
Share
Mark as Played

May 2, 2022 • 67 min
Reed Williams stepped on to Mountaineer Field as a freshman. It was his first game. He pointed high into the stands. His Moorefield high school football buddies pointed back.

A dream, their dream was about to become reality.

In this episode, Reed shares that memorable moment and looks back at an award-winning career on the field and in the classroom.

It's the story of a Mountaineer by birth and by choice.

That gives her an excuse not to play basketball anymore, but she's still heavily involved in the game she loves.

The West Virginia University Hall of Fame member is now coaching middle school players and having the time of her life. And, to no surprise, her young daughter is showing signs that she's on track to become yet another Bulger athletic success story.

It eventually led Smith to tears.

Smith shares his secret, and reveals much more during his visit with the "Guys".

The co-captain of West Virginia's 20210 Final Four team also explains the special pact his teammates created upon the departure of John Beilein.

Smith also gives some early recruiting insight into a potential star of the future.