Yes But Why Podcast •
iHeartRadio

Yes But Why ep 209 Steven Morgan is bursting with comedy goodness! - Yes But Why Podcast

Yes But Why Podcast

In this episode of Yes But Why, we talk to British comedian Steven Morgan about his experiences doing comedy across the world.

Steven Morgan is a comedian, improviser, storyteller, actor, writer, and musician that has been featured on Australia’s ABC and the UK’s BBC. Currently living in Nijmegen, Netherlands, where he moved from Brisbane, Australia, Steven has toured and performed in famous comedy clubs and festivals around the world. Since moving to The Netherlands, he has become a performer and teacher with Amsterdam’s easylaughs.

In our conversation, Steven shares stories of his journey, from performing in the UK band, Neon Highwire to hosting “Real Power Talk,” the wild comedy interview show made by Netherlands-based media company, All Things Loud.

Steven talks about how being a comedian was always something that was bursting to come out of him. I totally get that. Me too. But he didn’t get to it straightaway. It wasn’t until he moved to Brisbane and saw the vibrant comedy community that he was moved to join them. There, he immersed himself in classes and shows and fell in love with comedy.

We deep dive into discussing organizing comedy festivals when Steven mentions having organized the “Bris Funny Fest” one year. We talk about improv theory and providing context in your comedy. Steven stresses the importance of community and friendship.

My big takeaway from my talk with Steven was to make the most of every adventure you have. No matter where the world takes you, have fun with it.

Support Steven by watching “Real Power Talk” or by connecting with Amsterdam’s easylaughs to take online classes or just to donate to keep the comedy flowing.

This episode of Yes But Why podcast is sponsored by audible - get your FREE audiobook download and your 30 day free trial at http://www.audibletrial.com/YESBUTWHY.
Read more
00:0000:00 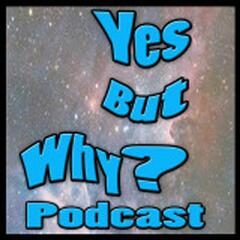