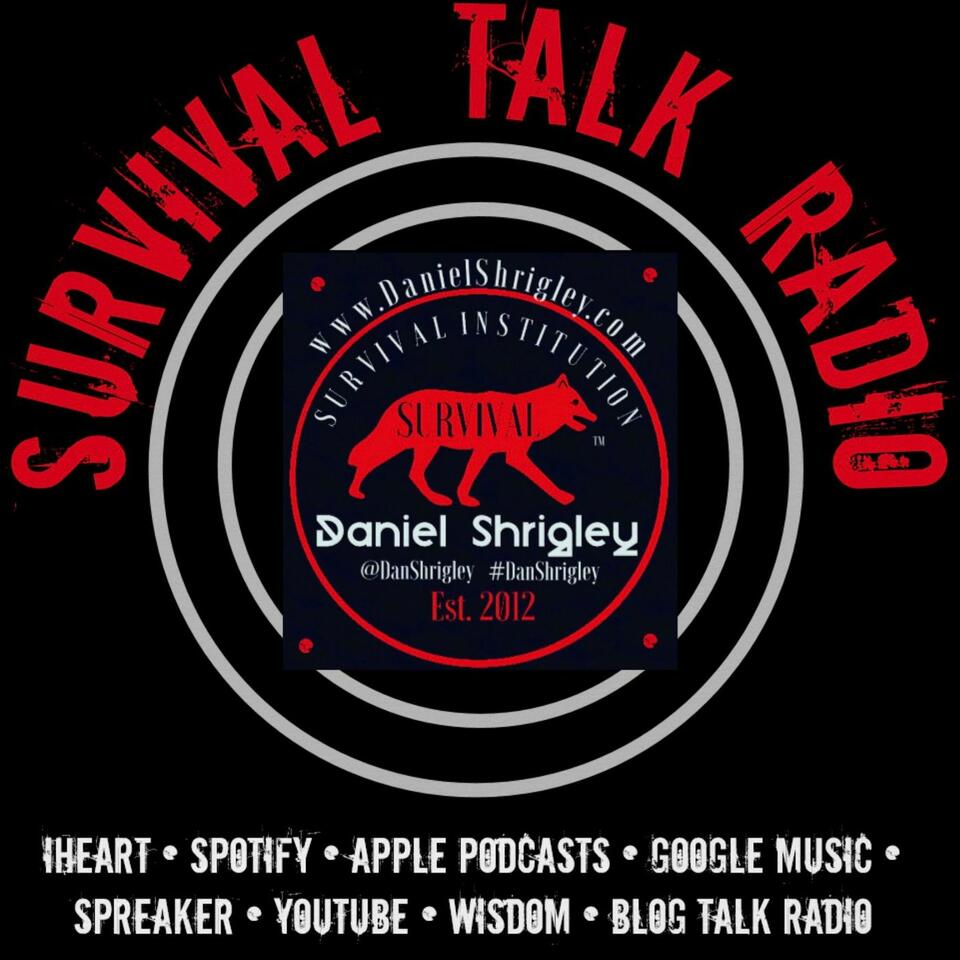 Ranked in the worlds TOP of the BEST Survival Experts. Daniel Shrigley uses the radio platform to teach, coach and mentor publicly about critical skills needed in full spectrum survival. From risk mitigation and safety management, primitive survival skills, modern sciences in the current age. He discusses proper preparation and planning for wilderness activities. Preparation for self-reliance and the psychology of survival. Bring focus to the priorities, fundamentals and education needed to thrive in a survival situation. Dan expands on a persons own creativity combined with education to deliver the best possible outcome when in a true real world survival situation. He offers tips and tricks obtained over a space of 30+ years. He is a 18 year combat military service veteran. 42 months of combined service in hostile conflict deployed in battle with the US Army as a 19D24 Non-Commissioned Officer. He is a advanced leadership Academy trained professional expert with, military tactics, weapons and chemical, biological, radiological and nuclear warfare (CBRN) and served as an adviser to his military chain of command. He is an expert; educator, mentor, coach, public figure in the survival services industry and recognized globally. Dan posses a common core value on subject matter related to this platform that exceeds that of any other published or broadcast-ed. Dan is the creator/host of Survival Trek Escape and other outdoor survival and adventure film projects. He is the Field Producer for Capriole Productions Inc., providing survival and safety services and advisory roles. Dan worked for six years in public safety for Personal Protective Services Inc., Intervention Agency Inc.. Combating high crimes and misdemeanors on the streets of the San Francisco Housing Authority Projects, Oakland Low Income and contracted properties as an Armed Patrolman. Survival Reality TV Star on Discovery Channel’s Ultimate Ninja Challenge 2018.

April 15, 2022 • 52 min
Certainly you have heard or seen all over the mainstream media Johnny Depp and Amber Heard Defamation trial. Johnny Depp is suing Amber Heard because as he claims lied about being his victim of domestic violence and abuse. How does someone survive being falsely accused? By exactly what Johnny Depp is doing by way of this trial. Letting the jury decide what’s true and false.
Share
Mark as Played

April 13, 2022 • 39 min
Daniel W. SHRIGLEY dives in deep into the current state of affairs within the United States of America. He urges listeners to take seriously the need to be prepared and start stocking up on seeds, shelf stable foods, grains, flour, sugar, salt and hygiene type products. The list doesn’t stop there, it’s extensive. Daniel will cover as much as he can in this highly requested episode. The most valuable inventory a person can posses i...
Share
Mark as Played

April 12, 2022 • 27 min
In this episode Daniel W. Shrigley talks about communication and signal. He walks listeners through the importance of having Two-Way radios and explains their functions and life saving features offered on Cobra Rx-680 long range radios as an example. He talks about the importance of whistles, banging on metallic objects or acoustic tones woods. He will cover signal fires and smoke. He will also talk about his Patreon and how you ca...
Share
Mark as Played

SEX TRAFFICKERS - HOW TO DEFEND AGAINST THEM FOR WOMEN

March 31, 2022 • 19 min
In this episode Survivalist Daniel W. Shrigley explains how to defend against sex traffickers and ways to change your daily habits to make yourself a hard target, versus a soft target.
Share
Mark as Played

Bruce Willis Retires From Acting Due To Aphasia.

March 31, 2022 • 60 min
How heartbreaking to learn that action movie star Bruce Willis is being forced to retire due to Aphasia. Let’s talk about what that is and how it effects the individual and people around that person.
Share
Mark as Played

March 30, 2022 • 35 min
Daniel Shrigley shares insights about the VA Home Loan and her current personal experience using the guaranteed loan. If you are a service member or a veteran it would only serve you best to use the VA HOME LOAN versus throw your money away paying rent.
Share
Mark as Played

Tall-Tale Signs; As Soon As Mid-Term Elections Are Over Democrats Plan To Implement Restrictions. They Love The Power & Control!

March 29, 2022 • 28 min
This election will decide if we live under house arrest, back to full restrictions or if we rise up and vote these tyrants out of their appointed and elected offices. We cannot allow ourselves to be locked under thumb by power hungry and greedy tyrants. If you vote Democrat you are voting to lose your rights and freedoms.
Share
Mark as Played

The Slap That Rocked Hollyworld

March 29, 2022 • 38 min
Will Smith slap Chris Rock at the Oscars on stage. Will Smith has apologized to Chris Rock a day later via his Instagram account on Monday, 28th of March 2022. Was this staged? I suspect this was staged and in this episode I’ll explain why.
Share
Mark as Played

March 16, 2022 • 20 sec
Russian lawmaker demands the return of all Russian properties of which some include the state of Alaska, a Russian Fort in California and Reparations due to the sanctions imposed by President Joe Biden which have thrown the Russian economy into a tailspin. Daniel Shrigley says; come and get it Russia if you dare.
Share
Mark as Played

March 8, 2022 • 1 min
Want to get exposure for your business on radio? Send an email to Daniel@DanielShrigley.com and get the word out to the masses about your products and services. Survival Talk Radio offers very affordable prices so you can advertise right away and gain a larger consumer base.
Share
Mark as Played

March 8, 2022 • 73 min
Daniel Shrigley talks about President Joe Biden ending his support for the Russian oil pipeline in Russia as punishment directed at President Putin for invading Ukraine and starting a war. A punishment? So does that mean Joe Biden was punishing Americans for electing President Trump and not Hillary Clinton when he stopped construction on our own pipeline and ending our energy independence? It now seems to be the case. We need Democ...
Share
Mark as Played

March 6, 2022 • 58 min
SGT Daniel Shrigley, U.S. Army (Ret.) has two decades of service in the military and has (4) combat deployments to his official OMPF/ERB and D.D. Form 214 (Honorable) discharge. For a total of 3 1/2 years of being in hostile territory (42 Months) and knows all to well what it’s like to be separated for the call of duty from friends and family. Daniel is going to share some of his experiences with listeners to better get them prepar...
Share
Mark as Played

Protect The 2nd Amendment At All Costs

March 5, 2022 • 83 min
Army Combat Veteran and Geo Survivalist SGT Daniel Shrigley, U.S. Army (Ret.), talks about the why we have the 2nd Amendment. He talks about why Democrats are working overtime to steal away your rights to bare arms and the ramifications if they succeed.
Share
Mark as Played

Surviving While Nations Are At War

March 5, 2022 • 98 min
Daniel Shrigley explains to listeners how to survive with a survival mindset in preparation of a potential world war and threats of nuclear war. He talks about the psychology of survival and where to being with your preparations. He talks about building or joining likeminded social media communities in your local area to be better prepared and networking starting now. Daniel tells listeners defeat a nuclear blast using natural terr...
Share
Mark as Played

March 1, 2022 • 9 min
Daniel Shrigley talks about the possibility of former President Donald J .Trump becoming Speaker of the House of Representatives and how he could use that position to become President before 2024.
Share
Mark as Played

January 25, 2022 • 83 min
Daniel Shrigley talks about tensions between Russia, Ukraine and the United States President Joe Biden. What to think about if worst case scenario happens with nuclear strikes. Start preparing now with inventory and skills needed to sustain if we go to war and if that war comes to our U.S. soil…
Share
Mark as Played

January 11, 2022 • 50 min
Daniel Shrigley talks about full spectrum topic pertains to survival in this mini series of episodes. This will be episode one of the series. From the fundamentals of survival outdoors covering fire, water, shelter, food and first aid. How to treat trauma, to CPR. This series will continue through multiple episodes until Daniel Shrigley closes out the topics in full. As the episodes progress the show will cover security, safety ris...
Share
Mark as Played

Episode 54 - My Response to Joe Biden and Kamala Harris Speeches.

January 7, 2022 • 80 min
Daniel Shrigley discusses with listeners about the speeches given by Joe Biden and Kamala Harris on January 6th. This is a conservative talk show, so be warned. This is a trigger warning to all Democrats, Leftists, Progressives and Socialists don’t tune in unless you want your feeling hurt with facts that disassemble the narrative fed to you by mainstream media and democrats desperate to cling on to power.
Share
Mark as Played