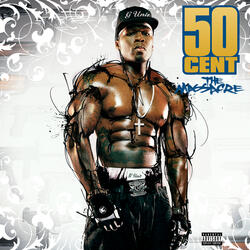 [Chorus]
I got a gatman
There's a problem I'ma solve it
A nigga movin' around
With a big ass revolver and a bat, man
What the fuck are you retarded
You touch Shady I'll leave you dearly departed

Robin, Cagney or Lacey, it's 50 cent and Shady
The worst baby, put your hands on my peoples
I'll react crazy, put a hole through ya front and ya back maybe
But dude if you try me, I'll have ya ass hooked up to an IV
I'll leave no witnesses when I ride, be
You fuck with me, you see
I'll react like an animal, I'll tear you apart
If the masterpiece was murder, I'd make shit art
Niggas knew I wasn't wrapped too tight from start
But bein' a little off, landed me on top of the charts
So you take the good with the bad, I guess
Level three Teflon plate on my chest
And my cock back hollow tip in the chamber
Will ain't ya, anger will change ya
And make ya aim there and squeeze

Motherfucker, you retarded you touch 50
I'll leave you dearly departed
We're walkin' away from a beef, in which clearly you started
I said we're walkin' away, did you hear me you want to be thankful
That we ain't beefin' was to agree and just leave it at "that"
That's when me, 50, and G-Unit hop back in that "bat" mobile
It ain't gonna be no more rappin', it's gonna be "Reh!"
Retaliation will be like that Muslim shi'ite "attack"
Some where along the line, its like me and 50 made a "pact"
He's got my back, I got his back, "back"
It's almost like we're kinda like Siamese twins
Cause when we beef we pull each other in
So we'll do shit like we're conjoined at the hip
Its just unavoidable some of this shit is washable
And some shit will never boil up
And some of it will just simmer at best
If left at home, we'll let it be so there won't be no sit downs
The days that Zino, there will no peace discussions with me
There ain't gon' be no friendly debates over crumpets and tea
Just quit fuckin' with me and I'll gladly quit fuckin' with you
This bitch is sixteen and do what you gotta do to get through
Without mentionin' me you're gonna sing ? to Jimmy Iovine and Dre and 50
D-Twizzie, Obie and just let it be or we'll be back with a

Nigga you get it twisted, you can get ya wig splitted
I don't give a fuck, I don't care if police know I did it
Man I hustle, I get money, in the sunshine or a blizzard
I go hard for that paper, homie I just gotta get it
Got a money scheme I'm plotting in the county and I'm with it
You cross me and you goin' make a cemetery visit
That's gangsta, you know me I told it, 'cause I live it
Showcases drop, when that chopper chop
Way up the block, get hit with copper tops
When drama pop, the llama pop
And it won't stop, you can run, call the cops
They say no, niggas know how I be on it
That shit you got, put my pistol to you I want it
Its not a game, perfect aim, you feel the flame
Up against ya brain, man its so hot I'll make ya wish it rained