Lean Wit It, Rock Wit It 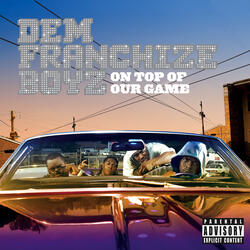 I bounce in the club so the hos call me Rocky
Posted in the cut, and I'm lookin' for a blockhead
Yup, in my white tee, I break a bitch back
And I keep a big bank, oh, I think they like that!
Before I leave the house, I'm slizzard on a goose
And I'm higher then a plane, so a nigga really loose
And I can lean wit' it, and I can rock wit' it
And if you gotta friend, she gotta suck a cock wit' it!

Ay, gon' and rock wit' it, gon' and lean wit' it
Rock so damn hard, you break your spleen wit' it
Pull up ya jeans wit' it, smoke some green wit' it
And da spot ain't crunk, bitch, if we ain't in it
If you don't wanna do it, then I'll make ya dance
Perfect example, watch me make your face beat up my hands
When you see me hit the spot, betta watch dat boy
Chalay, plus the squad and them Franchize Boyz!

Ain't too clean to wanna pop lock from left to right and make a lean
Bobbin' to da beat, check my feet; he ain't got these!
I rock them, bend my knees every time the beat drop
Lean wit' it, rock wit' it, freeze before yo' fingers pop
Purple lean, purple, green, grams in my socks
What the fuck you mean you ain't seen Buddie on tha block?
They call me Doctor Doc; I prescribe what a nigga need
Make 'em lean and rock, old school people pat ya feet

Young pimpin' in tha club, see them hos tryin' a act up
'Cause they see my chain and a nigga throwin' them stacks up
I keep a full clip and my pistol in my pants
I'm in the middle of the flow, they screamin' "nigga, do yo dance?"
Now you can roll yo' arms, and just put 'em in rotation
From side to side and snap yo fingaz like them Temptaions
Boy, I'm all outta state, doin' the dance; they never seen that
I ain't Fat Joe, but snap ya fingaz then ya lean back

The Squad, Baker Road, and Franchize on some other shit
Left wit'cha bitch, wit' an ounce, and a stiff dick
Didn't have to say much 'cause she seem obliged
Walked off the club, got on the phone, called her girl for menage
What I'm all up to, shit, let's see how it turned out
Gotta crack-headed broad, now we headed to my house
Ay, you wit' that G shit, right?
'Cause I done leaned, I done rocked all muhfuckin' night!