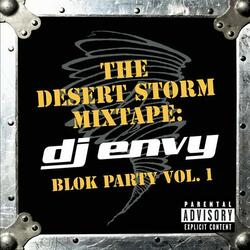 That shit sound like some superhero music right there (okay)
Sound like my theme muh'fucking song right there
(Desert Storm Mixtape, Volume 1) I like this one
I can groove to this one; Skane Dollar where we at? Clue!
Desert Storm, yeah, let's get it (whaaaaaaaaaaaat?)

[Jay-Z]
Watch on arm, rims on tire
Hov' in the studio, the roof's on fire {Yeah!}
S. Carter kicks on my feet {Woo!}
Roc-A-Wear on my leg, Envy on the beat
I made my first mill' off papi on the hill
I made in the rap game speakin on the reels (that's real)
I'm bling cause I passed the statute of limitation
and I'm makin too much money to be goin to jail (hell nah)
Who else you know on probation
leave the country for a month to go on vacation? (*laughing*)
Listeners, get your brain on drugs
Listen up, it's the flawless like cocaine dust
Her-on hero, do any thing for dinero
Like Joe Pesci, Hov' is so deadly
In the middle of the ocean, racin on jet skits (*PYOOM!*)
Get your mind right or get it on your left sleeve {ENVY!}
S.C., Jay-Z, either or
Young Hova, Big Homie, read 'em off
Daddy is home, niggaz are scared {Yup!}
Way before I put the key in the door
Ain't no other kings in this rap game, you kiddin?
Nuttin but my children, one shot, they disappearin
.. I'm on a whole 'nother level
I don't take your Jacob watch, I just screw off the bezel

[Jay-Z]
Rapper/slash, murderer/slash
Punk muh'fuckers I will murder your ass
Gangster somebody soon to be dad
"Blueprint 2" homie, junior is mad
Mad cause his new son sound a little better
Knock a little harder, show the growth in his father
Similar in robberies, damn you gotta love it
All that spells in the air in better music for the public