Who Stole The DJ 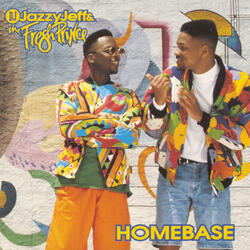 [Announcer]
Calling all cars, calling all cars
Be on the lookout someone has stolen the D.J.
Agent F.P. get on the case immediately

[Fresh Prince]
I Got the call about eleven fifteen
Twelve o'clock arrived on the scene
Looked around and things were ill
The party was at a dead stand still
People sittin' around no music
The situation was somewhat confusing
But I'm a detective I knew right away what happened
Somebody stole the D.J.
Who or why I had no clue
But I knew what I had to do
No eat no sleep, just work
Then walked past this fly mini-skirt
I had to dis her quick before she greeted
Come on baby I'm working, beat it
Come on I'm busy, just go away
Gotta find out who stole the D.J.

[Fresh Prince]
This mystery needed to quickly be solved
Cause there were kids involved
Friday and Saturday nights had no songs
Why, because the D.J. was gone
Smiles you used to dance and sing around
Now were replaced by frowns
And it was up to me to solve the mystery
And get back the disc jockey
I found an eye witness
But his breath wreaked of chitlins
All I know is his breath did pound
Buddy forget it, just write it down
No fingerprints no clues
The only witness was the bad breath dude
It was up to me to save the day
And find out who stole the D.J.

[Fresh Prince]
Through the door this dame walked in
I swear to James Bond a perfect ten
I thought to myself I'm working just forget it
Then I thought well maybe I've got a minute
So I took her down to the station
To the back room for some interrogation
Captain doesn't like it, but I must confess
I interrogate best when I'm undressed
We were in there for hours drained
To see who would break first, me or the dame
Then she broke, and her mind was my possession
(Prince I love you)
That wasn't the question
I only want to know one thing
I've gotta make the kids dance and sing
So tell me now cause crime don't pay baby
Who stole the D.J.

I scarrowed the city but still no clue
Lost like a cause, what should I do
Then like a bolt of ligtening it hit me
Ah, the worst villain in the city
I wasn't prepared for what was in store
He had stolen the D.J. before
You all know this ruthless foe
To his hideout
(Let, lets go)
Tip toed up the steps
Slowly and ever so quietly I crept
But out of nowhere I was attacked
Just like in the movies, clubbed from the back
I felt like a fool
(Man, you need to go back to private eye school)
I was the dunce of the day
There I was tied up with the D.J.

[Fresh Prince]
There we were both tied to a pole
I told the D.J. relax its under control
(Relax man, we both goin' down you can't even keep yourself untied)
Do you want to be free or not
I'm gonna get us out of this tight spot
I planned this all along cap
There a knife in my swiss army hat
With the blade I cut the rope
(Man your secret services spy hats dope)
I radio'd for back up cars
So we could put this crook behind bars
Another criminal off the streets
Another D.J. back to his beats
I walked in the club and I was happy to say
Ladies and gentlemen, here's your D.J.