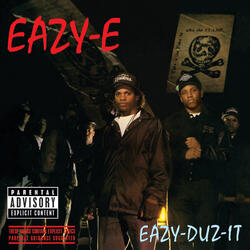 Eazy E rockin' non stop on the radio
with the funky fresh hip hop in stereo
Release some rhymes that you will find demandin'
with Dre's beats that are so outstandin'
I'm gettin' busy if you know what I mean
Always settin' me a mark in the hip hop scene
On the radio the greatest of all times
like Mohammed Ali cause I punch rhymes
So tune your station, and clear all the static
and tell the truth: you didn't know that I had it
in me, to be easy about the situation
So just kick it and listen to the station
playin' my music, it's hard to lose it
It's constantly on request cause you choose it
I'm Eazy E, my rap is strong
[and your radio's def when my record's on _ LL Cool J]

Now I want to turn up my box, and make much noise
and rock the party and shock all the be -boys
Take on my radio from phono to tuner
I wouldn't have did it, later but sooner
Now I move my antenna to the center
then grab a hold of the handle and (??)
then bust a rhyme, you know I won't quit it
Am I lyin', Ren ? [MC Ren: Man, you know you're witty]
Your request is clear, that you're givin'
Without Eazy E you wouldn't be livin'
with me on a top 10, or a mix show
So hit your power button, and let's go
on vacation, with your station
that's playin' live in every location
Blowin' out ya speaker
it won't get weaker
I'll keep rockin' till I hit the peek
And your station is dope E-A-Z-why
It's on the air, but you axe why
I took out the cursin', and took rehearsin'
I feel dry, you know that I'm thirstin'
to get busy; I don't quit it
and once you hear my cut, I know you're gonna get it
Then bust a rhyme, while you're clappin' your hands
It's Eazy E on the air [rockin' without a band]

[DJ: You're on the radio, on K-EAZY-E, with Greg Mac. Don't forget to
join us this friday night live, we'll be jammin' it uptown with my
homeboys Eazy E, of course, N.W.A. and the whole Compton posse.
Can't make it out but, hey, stay eazy, and stay it on K-EAZY-E...
with more...radio]

Now disc jockeys are playin' me in rotation
hittin' number one spots across the nation
I'm on the charts, you can go list'em
but now listen, I'm on your system
AM or FM, I'm in power
You hear my music once every hour
So listen up to the rhyme and percussion
but do this with no discussion
Eazy's easin' fans I'm pleasin'
Why, I'm on top yo, I got reason
With no profanity, but what can I say
Yo Dre [Dr.Dre: What up ?] Do it your way
On the radio you get more looser
Take my word you're a dope producer
We combine to put out hits
but jealous people, they just have fits
cause we get airplay, but we're not through
Dre, am I serious ? [Dr.Dre: Cold word] Well thank you !
People that hear me, they know what I'm sayin'
On the air, I don't be playin'
Just gettin' my point across to the public
Rhymin' on the radio, that's my subject
I can play [rock], but I prefer [hip hop]
It's Eazy E on your radio non stop !

Chat About Radio by Eazy-E