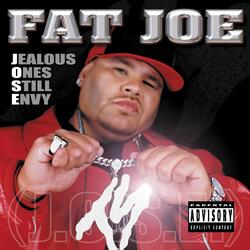 [Saya]
An' bamba clad boy feel dem bobbin try an' test now!
Is that? Cut off dem blood-clot nigga don't give a fuck!
Watta feel like? Don't know how to kill?

[Saya] What is it Khalid, what is it?

[Fat Joe]
The fuck?! What?!
Yeah, mind on my money; money on my mind
Nigga mind on my money; money on my mind
Aiyyo, who can test I, the true King of N.Y.
Well ever since Big Boy died from Bed-Stuy
I've been, controllin the street, holdin the heat
Shit I only want what's stolen from me (Nah you ain't fuckin wit us)
Rollin with me, could only get you fast cars and
Fuck mad bitches and, dine amongst the stars,
but we gettin mad chave in the life we live
MTV's comin over just to feel my "Crib"
Man fuck them other kids! That's how I feel
I thought I said it all in "He's Not Real"
But you beggin me to kill, must want ya brain spilled
I tryna keep cool but it's hard to tame still
Shit's still real man you never shoulda bought it
Must feel ill to see your boss get extorted
Specialize in audits and makin hot tapes
This rap shit don't cut it then it's back to flippin weight
Man I'm feelin great (Whoo!) Pushin mad units
Hustlin is the key to success but could you do it
I been layin it down, the spray and the town
It's about time the rightful owner claimed his crown

[BB] Who the fuck you know be fuckin with this?!
As Big Pun's knowin you'll be givin a shit!

[FJ] Not a damn soul! I let you know from the get go!
want to war with the Squad, walk through the threshold!

[BB] Who the fuck you know be fuckin with this?!
As Big Pun's knowin you'll be givin a shit!

[FJ] Not any squad or clique can squab with this!
Shit I'm O.G. nigga why'all know how this is!

[Fat Joe]
Hey yo, it's all over, I want a piece of the pie
Nigga hand it over or all your seeds gon' die
And it don't take much for me to kidnap a DJ
Or clap at ya truck while you ridin through the freeway
Shit is mad ea-say to wet you up
Betta, watch yo' bitch and who's dick she sucked
She gon', set you up, I been to the crib
I don't know why you surprised bitches love the kid
I'm more realer than the way you act
A born killer quick to wave the mack
And all you niggaz gotta face the fact
I pop shit 'cause you can't stop me
More rich 'cause they can't rob me
I plant clips at ya fam's lobby
Joe the Don and you been warned
But niggaz never want to listen till they kin's gone
Now you want to get it on 'cause ya dollars stack
Now how you plan to holla back with a hollow back?
Joey Crack and I be the truth
Don't believe that's the streets till proof
Ask the deez how my Eagle blew
Betchu sayin, "Damn, what we did to duke?!"
Better gather them young'ns and hope you make it through