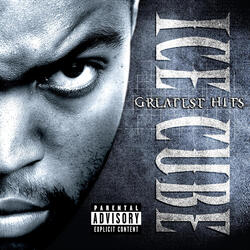 [JD]
Police, eat a dick straight up
Look here you little God damn nigger, your not gafflin' nobody
You fuckin' understand me
(kick his ass)
That's right, get down on the God damn ground now
Fuckin' move now
(Let me take a shot at him)
We're gonna do you like King

What God damn King
Rodney King, Martin Luther King
And all the other God damn King's from Africa
Look out motherfucker

[Ice Cube]
God damn, the bigger the cap, the bigger the peeling
And when dealing with the Lench Mob you gots to know
Steady Mobbin is not just the name of this jam, but a way of life
Bound together by motherfuckers that's known
To break em off something, give it to me
Four or five niggas in a mothership
Better known as a goose and we all want to smother shit
Bent, front and back glass got tint
Tryin' to get our hands on some dollars and cents
And fools can't hold us
Every chance we get, we hitting up the rollers
Comin' up short of the green guys
And I might start slanging bean pies
Or the bootleg t-shirt of the month
With "you Can't Touch This" on the front

I'm bout to get rich
Cause life ain't nothing but money and fuck-a-bitch
They drop like dominoes
And if you didn't know, Ice Cube got drama hoes
So after the screwing
I bust a nut and get up and put on my white Ewings
I'm out the do'
All you might get is a rubber on the floor
'Cause I'm ready to hit the road like Mario Andretti

Bitch, cause I'm steady mobbing
Busting caps in the mix
Rather be judged by twelve than carried by six
'Cause I'm getting major
Fuck Pac Tel, move to Sky Pager
Told all my friends
Don't drink 8 Ball, cause St. Ide's is givin' ends
Fools get drunk and want to compete
Slap-boxing in the street
Niggas get mad, tempers are flarin'
'Cause they got a few bitches starin'
Just for the nappy heads

But scandalous bitches, make for happy Feds
I'm making my duty to cuss em
Out, 'cause I just don't trust em
And if you tell on me I'm bombing on Betty
Bitch should of known I was steady mobbing
Since one-time so hot
Got me a stash spot in my hooptie for the glock
And I'm rolling on rims
Eating soul food, and neck-bones from M&M's
Grumbling like a motherfucker
Greasy-ass lips, now I gots to take a shit

Saw Sir Jinx bailin'
When I hit a left, I moved felon, 'What up loc?'
Don't you know that niggas get smoked
That take they life for a joke, get in nigga
I take you to the pad zoom
Went to mom's house and dropped a load in the bathroom
Jumped back in my low rider
Coming out feeling about ten pounds lighter
Went to Bone's house so I can get the gat
Looking for the place where all the hoes kick it at
Lench Mob ain't nothing but tramps
But hoes licking us like stamps

One fool brought the music for the yams
But Ice Cube had more amps, get in bitch
'Cause I had the jam on
And I don't want to hear shit about a tampon
Give me the nappy and make me happy
The hoe said 'Pappy could you slap me
On the ass hard and fast
And could please try not to leave a gash?'
I said yeah, but I don't play sex
When I'm putting on the latex
Slipped on the condom
Fucked around and dropped the bomb son
And it came out sort of like confetti
In for the night, no longer steady mobbing