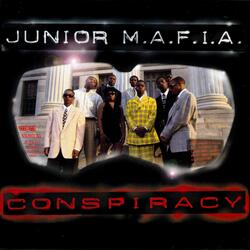 Why niggaz want to clock me?

Don't they know I break motherfuckers into parts like Rocky

It's Klep the death specialist Stallone and Stone shit

Stayin high representin for the nine-quint

Ras bad guy, burns the house down like Left Eye

Why try mimic? MC's get broke like speed limits (uhh)

Niggaz can't fuck with my metaphors

Canin MC's like they in Singapore; Klep been through more wards

on the regular, got that net, push me round and Dread stressin a

Robbin his workers for they work; now, WHOSE TURF IS THIS?

It's Klep's, the clothes wreckers'

Check enough sex in her, my styles are regular

Dangerous, since my daddy bust me out

the tip of his dick, Biggie Smalls with the wickedest shit

I strangle each -- negro for they dough

Niggaz get to bendin, got two cases, one pendin

The menage-a-trois around my waist

Windows cracked, so sit back relax

Yo Vec, crush the hash, the Beretta's in the stash

What you doin with yourself? Stone heart's the way to wealth

on the cel with bitches on hold, that's how we roll (uhh)

Money on my mind, open lips from my eyes

BIG is repellant, to all that "He say, she say"

Your whole crew's vagina, you and your co-signer

Nigga, we rollin in eight and a halfs, TV's in the dash

Three G's in the stash, see we love the cash

No coke, then get some more

how complex it is, baggin bitches in GS 300 Lexuses

and the sex is for summer sports

Got bitches bringin they own condoms on the first visit

BIG for President, buckin shots past the spleen

Electric chairs, which MC's do you fear?

Chat About Oh My Lord by Junior M.A.F.I.A.