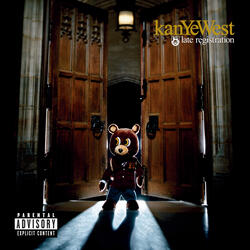 Back when they thought pink polo's would hurt the Roc,
Before Cam got the shit to pop, the doors was closed.
I felt like Bad Boy's street team, I couldn't work the Lox (locks).
Now let's go.
Take 'em back to the plan,
Me and my momma hopped in the you-Haul van.
Any pessimists I ain't talked to them,
Plus, I ain't have no phone in my apartment.
Let's take 'em back to the club.
Least about an hour I would stand on line,
I just wanted to dance.
I went to Jacob an hour after I got my advance.
I just wanted to shine.
Jay's favorite line: "Dog, in due time"
Now he look at me, like "Damn, dog, you where I am"
A hip hop legend.
I think I died in an accident, cause this must be heaven.

Back when Gucci was the shit to rock,
Back when Slick Rick got the shit to pop,
I'd do anything to say "I got it".
Damn, them new loafers hurt my pocket.
Before anybody wanted K-West beats,
Me and my girl split the buffet at KFC.
Dog, I was having nervous breakdowns,
Like "Damn, these niggas that much better than me?"
Baby, I'm going on an airplane,
And I don't know if I'll be back again.
Sure enough, I sent the plane tickets,
But when she came to kick it, things became different.
Any girl I cheated on, sheets I skeeted on.
I couldn't keep it home, I thought I needed a Nia Long.
I'm trying to right my wrongs,
But it's funny these same wrongs helped me write this song.
Now,

Yes, yes, yes guess who's on third?
Lupe still like Lupin the Third.
Hear life here till I'm beer on the curb
Peach fuzz beard but bit on the verge
Hold it down like we're on the serve
Bottle-shaped body like Mrs. Butterworth's.
But, before you say another word,
I'm back on the block like a man on the street.
I'm trying to stop lying like a Mum-Ra,
But I'm not lying when I'm laying on the beat.
Engarde, TouchÃ?Â© Lupe cool as the Unthar,
But I still feel as possessed as a gun charge.
I come as correct as a porn star,
In a fresh pair of steps and my best foreign car.
So, I represent the first.
Now, let me hear my verse right where the horns are like