Music For The People, 5m 07sec 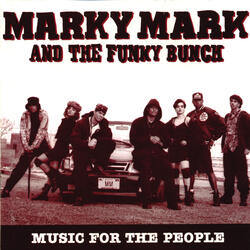 Marky Mark and the Funky Bunch

Annie was a high school cheerleader
Pom poms and bobby socks, no girl was sweeter
Come Prom time everybody was on the line
All the fellas swinging nickel and dime
Tales about love and lust and trust
But Annie took it all in stride
Cause deep inside Annie had aspirations
Wanted to be a chemical engineer
Making fifty to fifty-five thousand a year
Her first year of college was a success
But along came Billy possessed and obsessed
He took Annie on a fatal date
And showed her things that make heartbeats accelerate
Annie took a hit breathed two short breaths
One for life..the last for death
Now she's gone, a former Valedictorian
Ended up becoming a topic for historians
Washed up dreams and shattered pride
All because Annie took a hit - on the Wildside

Ron had enough of being broke everyday
Saying to himself, there's gotta be a better way
Cause 9 to 5 wasn't worth the headaches
So Ron figured out a faster way to make - money
Before you know it, he's a rich man
Gold on every finger of his hand
A brand new BMW, a condo, Ron ended up a John Doe
A body was found in the alley but never claimed
Full of bullet holes but none to blame
Ron became another victim of homicide
Because he chose to walk - on the Wildside

Charles had everything going for him
A top paying job, a good life, a good wife
A baby boy on the way any day
A gentleman attitude is all he displayed
Carol was the wife he loved and adored
Her family and friends treated him like an Ambassador
One night on the other side of town
A police dispatcher picked up a weird sound
Charles on the car phone asking for help
Claiming a burglar shot his wife and himself
His pregnant wife lay slumped over
Dreams corrupted and a young life over
Extensive searches throughout the projects
Put a lot of people through misery and wreck
Everyone a suspect 'til someone was found
Interrogated 'cause their skin was brown
Then there was Bennett, guilty until proven so
But soon as the case started moving slow
What do you know, sure as as sea gull gets webbed toed
Charles was the culprit
The whole plot was an insurance scam
Charles and his brother came up with a plan
Kill Carol, collect a big check
Blame it on a black man, what the heck?
And just before the story was known
Charles had a feeling that his cover was blown
So he jumped off a bridge
Committed suicide
This is how it is - on the Wildside

Little Tiffany, only thirteen
Came to the city, place of big dreams
Visiting family and friends for the summertime
Sittin' on a mailbox, watchin' the boys climb trees
And the girls play hopscotch
So far, her vacation was top notch
Then out of the blue, a Mercedes at top speed
Gang bangers chasin' the robbers on the stampede
Quick as a blink shots rang out loud
And a hail of bullets zipped through the crowd
One hit Tiffany, and instantly she died
Innocently - on the Wildside