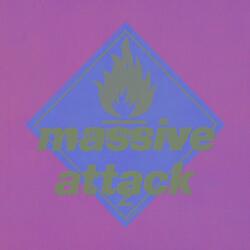 Can't be with the one you love, then love the one you're with
Spliff in the ashtray, red stripe, I pull the lid
Her touch tickles, especially when she's gentle
But I don't hear her words 'cause I slide the instrumental
Keep the girl in the distance, moves are very hazy
No sunshine in my life the way I deal is shady

Skip hip data to get the anti-matter
Blue lines are the reason why the temple had to shatter
To the sound of silence surrounded by the mass
Her face is on the paper, not the strangers that I pass
The ones that are looking back to see if they are looking back at me

Are you predator, or do you fear me?

Yeah, while I'm doing this, I know
The place I really wanna go
The one I love but never gets near me

It's a beautiful day well, it seems as such
Beautiful thoughts means I dream too much
Even if I told you, you still would not know me
Tricky never does, Adrian mostly gets lonely
How we live in this existence, just being
English upbringing, background Caribbean

There's a looking glass she's looking through
She hated me, but then she loved me too
I'd lie, not try, so I lost faith
Then turn to her to keep the faith
She told me, 'take an occupation, or you lose your mind.'
And on a nine-to-five lemon, looking for the lime

Box clever, watch your system come together
Crazy weather at the end of my tether

Some go softly, softly round the habitat
Ratchet in the right hand
They got no one to stab it at
Take a walk, Billy, don't be a hero
Effort's on minimal though almost touch zero
Excommunicated from the brotherhood of man
To wander lonely as a puzzled anagram

Car paint blue, green, primer and zinc
Take it to extremities, my purple and pink
I feel the colours fill my room beneath the patter of the rain
I can't stand the drops that dribble down my windowpane
They wash away my shadow and don't even leave a mark upon my soul
They leave the rainbows in the dark

Blues get big, Massive are even larger
Save enough space into the tricky tardies
We'd trawl what I saw from down in Darren's hall
People laying their claim
In stormy weather it's rain

Somebody da-ditty, nobody
Walking on sunshine, but, still, we're treading water
The son of many reasons searching for the daughter
Seeking knowledge, not acknowledging the jet-set
Silver papers of the sound within my Budakon headset
The solar system watches in wisdom
The children dance as the moonlight kissed them

To Massive Attack, Matt Black appear wearing beads
Two hours traveling, so I wrote this on repeat
Always living fast, people getting jumpy
Where on Gruggy falls I just do the Walter Crumpy
Microphones held close, crouching far apart
Take my piece of mind, and sign my name across your heart